Advertisement
The Newspaper for the Future of Miami
Connect with us:
Front Page » Real Estate » Coconut Grove residential prices skyrocket 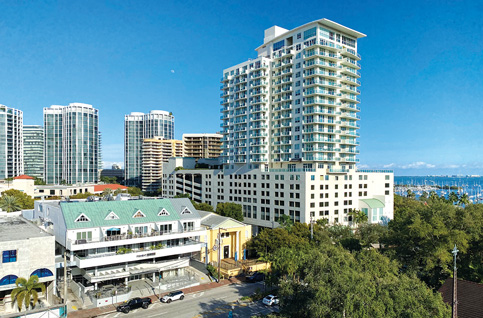 Miami-Dade’s real estate market may be in for a record year, local experts have said, and in the Coconut Grove neighborhood factors like low inventory and walkability are causing homes to sell fast and prices to rise.

Only around 100 single-family homes are on the market in the neighborhood right now, said Riley Smith, president of the Berkshire-Hathaway affiliate Riley Smith Group, while a healthy market would have at least 150.

The average price per square foot in Coconut Grove for a single family house, Mr. Smith told Miami Today after this article was published in print, is $497, up from roughly $475 the year before. The average asking price, he said, will probably be even higher once January’s numbers are released.

“The past 30 days,” said Charlette Seidel, managing broker at Coldwell Banker’s Coral Gables/Coconut Grove office, “show a 32% decline in inventory and an 80% rise in pending sales.”

The hottest market, she said, was for single-family homes priced between $1 million and $1.5 million.

Finding a single-family home below $1 million, Mr. Smith said, is difficult unless the house is in disrepair or very small. Townhomes, he said, could start at around $600,000, but usually cost north of $700,000. Condos, he continued, are available at a wider range and could cost anywhere between $200,000 for a studio in an older building to many millions of dollars.

David Martin, CEO of development firm Terra Group, said the area appeals to a wide range of demographics due to its walkability, strong schools, culture and greenery, which is protected by strict regulations. Terra currently has two condominium buildings in the area, he said, Park Grove and Grand Bay, and is working on a third, Mr. C Residences, which will be delivered mid-2022 and is already 50% sold.

The new building, he said, may be among the last on Bayshore Drive, and restrictive zoning laws that limit development in most areas to two or five stories mean a great deal more high rises are unlikely. This zoning, he said, creates scarcity in both the office and residential real estate markets.

Coconut Grove, Mr. Smith said, also benefits from its location, as the community is both near the water and one of the closest neighborhoods to downtown and Brickell.

Buyers, Ms. Seidel said, come from all over, whether they’re transplants from California or the Northeast or locals looking to move from condos or homes in other areas of Miami-Dade.

Some new product in the form of single-family homes may pop up later this year, Mr. Smith said, but this would probably only be around 30 to 40 residences. Single-family home buyers, he said, are often looking for space and pools.

The Grove itself, Ms. Seidel said, attracts a wide range of buyers as it “has a small charming retail district, lots of restaurants, newer office buildings, is very walkable and has a beautiful and long waterfront.”

“There is only one big box store,” she said. “The rest is mostly small businesses.”

In condominium buildings, Mr. Martin said, buyers are looking for unique activations and offerings, as well as a smart technological setup. In this age, he said, good cell or wireless coverage and technological reliability, speed and access matter to customers. Due to covid, he added, many potential buyers are also drawn to touchless systems and services and more aware of air circulation systems.