Advertisement
The Newspaper for the Future of Miami
Connect with us:
Front Page » Arts & Culture » Miami arts relying on intimate digital performances 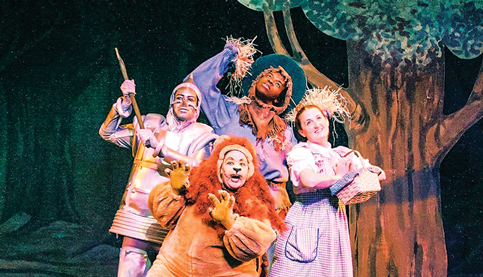 Performing arts groups, theater houses and institutions are using technology to spread their work around the world, along with smaller more intimate inhouse productions.

A hybrid of in-person theatrical performances and an emphasis on digital content producing and live streaming are the means Miami-Dade’s cultural arts identities are having their voices heard and art showcased.

“The fellows are back rehearsing and have begun all of that incredible matrix of rehearsals,” said Howard Herring, the symphony’s president and CEO. “On stage, we are unable to accommodate the full orchestra due to social distancing measures, but there’s a tremendous amount of music happening with a smaller scale of ensembles. We will create about 35 webcast streams in the middle of May that will serve our local audience as well as our global audiences.”

The New World Symphony has become a laboratory for generating new ideas about how music is taught, presented and experienced. The pandemic forced the symphony to respond with new concert formats, digital distribution systems and artist and repertoire choices.

“In all likelihood, there will not be a two-hour performance, they will be shorter in duration,” Mr. Herring said. “With the national global network IDAGIO serving our community and inviting others, we are going to be experimenting on what classical music will be like online.”

New World Symphony is the beneficiary of two funding initiatives established by trustees and in support of innovation. The Fund for New Ventures, established by long-time supporters Robert and Diane Moss, invites philanthropic investment in forward-looking strategies for education and musical performance. The Resilience Fund, established by Judith Rodin, author of “The Resilience Dividend: Being Strong in a World Where Things Go Wrong,” allows donors to support current and future programs that will make the symphony more responsive and inventive.

“A resilience fund is set up to cover the needs of the institution and projects that might not come together in the face of the pandemic, including daily Covid-19 testing and covering experiments of the online content,” Mr. Herring said.

The relief fund started with a $500,000 donation and now has grown over $1 million from other donors.

On Feb. 19, the symphony will bring back its Wall cast encore concerts screenings, which will be an intimate celebration of the tenth anniversary of the New World Center at 500 17th St. in Miami Beach. The 33rd Anniversary Virtual Gala Honors Knight Foundation and New World Symphony Resilience will also take place virtually Feb. 20, with all proceeds benefiting the Resilience fund.

“Audiences are reading to come back and by using our encore Wallcast concerts, we want the community to be together with socially distanced pods,” Mr. Herring said.

Having to modify the Adrienne Arsht Center commissioned performance of “Birds of Paradise,” creator Pioneer Winter said he had to slightly rethink his vision in bringing the real experiences of South Florida’s LGBTQ+ community to life on stage.

“Whether it’s film, multimedia or live performance, instead of having dancers coming together, now we are looking at seven separate solos as they find birds of paradise,” Mr. Winter said.

Set to world premiere in September at the Arsht Center at 1300 Biscayne Blvd., the showcase will mark a two-year artist-in-residence program with Mr. Winter and his Pioneer Winter Collective that began back in December 2019. As the center’s first artist-in-residence in more than a decade, Mr.

Winter and the collective are holding free community workshops and expert panel discussions on the center’s website.

“I definitely think that we are in that time of learning, looking around for inspiration and best practices and a lot of resource sharing,” Mr. Winter said. “The beauty is that a lot of artwork is now automatically being recorded without having to do a live event. With Zoom, it’s done and documented and it exists. The work artists are doing is being visualized.”

Realizing how many families and children were needing the arts back, the Actors’ Playhouse at the Miracle Theatre’s Executive Producing Director Barbara S. Stein said the theater at 280 Miracle Mile decided to do a soft reopening with the Wizard of Oz during the weekends running from Feb. 20 to March 14.

“We are moving forward, but the numbers we are serving are not meeting the cost. We had to partner with other theater companies and livestream film stage plays with no audience and have a global audience,” Ms. Stein said. “We were supposed to open last November with one of our biggest shows called Gloria Estefan: Get on Your Feet.”

Season tickets are transferring to the new season starting next November, she said. “Our targeted age group is a little older and I believe that they are preoccupied trying to get vaccinations, instead of renewing their subscriptions.”

To have a full house is just not going to happen right now, which makes it difficult to make concrete plans, Ms. Stein added.

“We are surviving, though, and I feel really comfortable going forward,” she said. “We’ve had very good business managers over the years, and we have people in the community that really do care about us.”