Advertisement
The Newspaper for the Future of Miami
Connect with us:
Front Page » Transportation » County drafts downtown Miami transit-oriented revamp 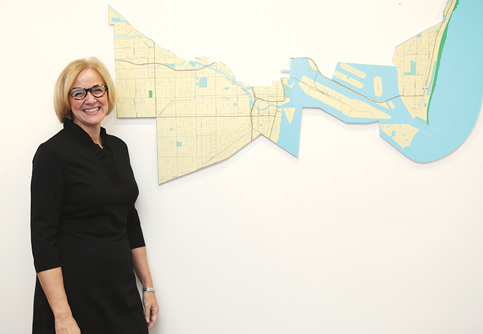 After several delays, a report meant to guide the first phase of a planned redevelopment of 32 acres in the downtown Government Center area should be done by summer, according to Miami-Dade commissioner leading the push to revamp the area.

Progress on the report, which officials initially expected would be finished more than a year ago, stalled once Covid-19 hit. Efforts were again hampered as control of county government changed hands.

But work has now resumed, said Commissioner Eileen Higgins, who said she and Mayor Daniella Levine Cava met early this month “to look at the vision for what we think we can do for the county with that redesign, to build a transit-oriented neighborhood that also brings a lot of public good and is another place for affordable housing.”

Ms. Higgins told Miami Today that her office and county staff will next host a meeting in March to get further feedback from residents.

“Then we’ll include that input [in the report] and get the mayor’s approval to try to get some phase one work going out this summer,” she said. “We’ll be able to take those ideas and then determine whether it’s a [request for proposals] or a [request for information] out on the street.”

The report is a long time coming. Initially expected in January 2020, then by that April and later punted to no date certain, the document is to serve as a conceptual roadmap for an overhaul of 34 county properties around the county’s headquarters.

Among them: the Stephen P. Clark building housing County Hall and central hub of Metrorail and Metromover, the Juvenile Assessment Center, the Lawson E. Thomas Courthouse Center, the Main Library and HistoryMiami museum.

Those properties and 29 others are part of the Government Center Subzone, one of five subzones in the Fixed-Guideway Rapid Transit Zone county lawmakers created in 2014 to reclaim regulatory jurisdiction of Metrorail-adjacent properties within City of Miami limits.

Others include the Downtown Intermodal District Corridor Subzone, which allowed Brightline to be developed, as well as the Brickell Station and Historic Overtown/Lyric Theatre subzones.

The vision for the Government Center area shared by Ms. Higgins and others from the county, including Nathan Kogon, assistant director of development services for the Miami-Dade Department of Regulatory and Economic Resources, is of a dense, pedestrian- and bicycle-friendly neighborhood with affordable housing and many public amenities like a modernized library and a new park.

And that park shouldn’t just be concrete and fountains, Ms. Higgins said.

“The part that still needs the most work [in the report] is making sure we have a green space that is activated in a neighborhood way rather than just grass – a greenspace that is activated night and day that will make this a neighborhood where people want to live and work,” she said. “There’s the ability to make this feel like there’s this community space to play and use that is very much missing from the downtown core. Bayfront Park certainly exists, but it’s generally an event space versus a community gathering space, and so it’s having the ability to do a little of that.”

Once the preliminary work is done and ground can be broken, Mr. Kogon said previously, work to redevelop the Government Center Subzone shouldn’t encounter much political opposition.

“[It’s] not a highly political hot potato,” he said. “It’s almost that we had a diamond sitting underground nobody could see, and we pulled it up so it could shine. [This] additional layer we’re doing, this study, is really a finer polish that we want to bring back.”