Advertisement
The Newspaper for the Future of Miami
Connect with us:
Front Page » Profile » Veronica Birch Flores: Leading her bank to fill a local niche in a higher-tech way

Veronica Birch Flores: Leading her bank to fill a local niche in a higher-tech way 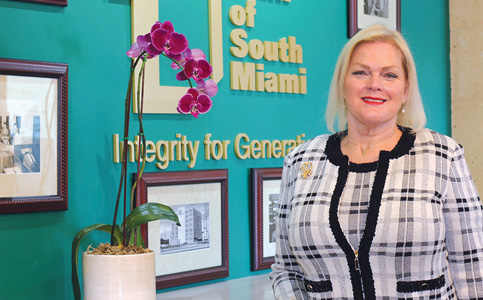 For a community bank, business is just as much about the little things as it is the big things. It’s details, personal care – tellers being on a first-name basis with customers, loan officers remembering important anniversaries and the expertise and care in providing a guiding hand in a time of economic uncertainty.

Few local financial institutions do it as well as First National Bank of South Miami, according to Veronica Birch Flores, the bank’s chief operating officer and executive vice president who has spent more than half of her four-plus decades in community banking there.

“We don’t have a bunch of shareholders looking for more earnings” she said. “Our ownership told me when I started, ‘We only want to be paid for good things. We want to serve our community, and we want this thing to be around for generations to come.’ Now, it’s really easy to be a superior bank with those marching orders.”

Founded in 1952 by the Wirtz family, which still owns about 80% of the company today, First National Bank of South Miami was formed around a community need, a solution for local businesses that wanted an alternative to traveling all the way to Coconut Grove for deposits, investment and loans, among other services.

Nearly 70 years later, the bank has outlasted competitors of comparable size or larger, all while retaining the support of many who backed it at its onset – a testament, she said, to the bank’s staying power and value within the community.

“Many of those initial investors in the bank, their families still own bank stocks here, [though] stocks haven’t been for sale for 40 years,” she said. “It’s privately held. No one can buy stocks. I wish I could.”