Advertisement
The Newspaper for the Future of Miami
Connect with us:
Front Page » Real Estate » Nonprofit gone, historic Gusman Theater gets temporary manager 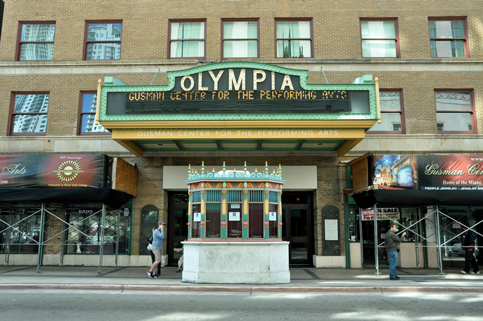 The City of Miami has turned to a full-service commercial real estate brokerage firm to manage the historic Olympia Building on a temporary basis after terminating its partnership with a non-profit operator late last year.

City Manager Arthur Noriega was given the go-ahead from commissioners last week to negotiate an agreement with NAI Miami to lease and manage the Flagler Street property on a month-to-month basis until a permanent operator is found through a Request For Proposals (RFP). Currently, the RFP is in draft form and undergoing review by the city’s legal department.

The city and Miami Parking Authority already use NAI for leasing and management at several municipal properties.

NAI CEO Jeremy Larkin told Miami Today that the proposed agreement asks his company to serve as an interim development partner, and the plan would be to “keep things moving” at the Olympia Building until a permanent operator is found. He said NAI’s approach for supervision of the 88,180-square-foot city-owned property would be to keep its commercial and residential leases somewhat short term with options for the new operator to terminate, if desired, once it takes over.

The property at174 E Flagler St. has 79 apartments, four retail stores and the theater with 10 former apartments serving as dressing rooms.

Mr. Larkin said the commercial market in the area is currently good and is likely to get better now that businesses are starting to go back to work. Consequently, he said, NAI foresees it’s viable to look for commercial and residential tenants.

NAI will maintain the theater, also called the Gusman Theater for the Performing Arts, but not be involved in its operations.

In a letter written to Sergio Rok, director of Olympia Center Inc., Mr. Noriega said both the City of Miami and the Olympia Center Inc. have benefitted from a partnership spanning many productive years. “However, in these trying times amid the pandemic and other multiple hardships, the challenges of running a historic theater complex have become a daunting task,” Mr. Noriega wrote on Aug. 20.

Robert Geitner, general manager of the theater and Olympia building, spoke with Miami officials about the possibility of transitioning the property back to the city, Mr. Noriega said. “As a follow-up to those discussions, the city realizes that the burden placed upon Olympia Center Inc. is one that will continue to create hardship, and could potentially result in an even greater cost to all parties.”

Those “unfortunate facts” led to the city’s determination that it was in the best interests of all parties to begin an accelerated process of terminating both management agreements, Mr. Noriega wrote.

NAI’s proposed fees for the temporary job include a start-up of $3,000 and 5% of gross collections monthly with a minimum of $5,000 per month. Leasing fees for apartments would be $500 per unit for each new lease or renewal, and for retail stores 6% of the gross rent generated during the primary lease term with a minimum of $3,000 per lease.

NAI’s staff for the job would include an off-site part-time senior property manager whose salary would be included in the monthly property management fee; an on-site full-time maintenance engineer whose salary would be inclusive of all direct costs, benefits and direct overhead and given with a rent-free apartment; and an on-site part-time administrative leasing agent who would earn up to $20 a hour.