Advertisement
The Newspaper for the Future of Miami
Connect with us:
Front Page » Opinion » Miami-Dade should shepherd creative workforce housing

If the road to hell is paved with good intentions, hell is where a creative shipping container home in South Miami may be headed.

The Miami Association of Realtors found a tiny lot to show that affordable hurricane-resistant houses for lower-income buyers could successfully use county-owned surplus land. Miami-Dade County OK’d the project in 2018.

Using surplus land and a former freight container, the home would sell to an under-housed buyer at cost. What could be a better intention?

The realtors followed through; the county didn’t.

The association barely won a go-ahead as five commissioners voted not to sell the lot for $10. Joe Martinez said a $133,000 cost “for a shed” was far too high. Now-Mayor Daniella Levine Cava asked for a $96,000 top price. The final ceiling is the lower of the association’s cost or $205,000.

If the home sells at the maximum, the Miami Association of Realtors still will take a bath. Although container homes have risen elsewhere in a month, nothing is simple here – the project has gone through hell and, though the home has been finished for three months, more hurdles loom to finally sell it.

It all goes to show that no good deed goes unpunished.

“[We] are trying to figure out how we can do this, so we can provide more housing for our workforce,” said association VP Danielle Blake in 2018. “There [are] a lot of these surplus tiny lots throughout the county. With this project, we want to identify what the barriers are.”

If finding barriers was the aim, the association won the prize: barriers arose over and over, and more have just popped up. From the start, the project was under a cloud. 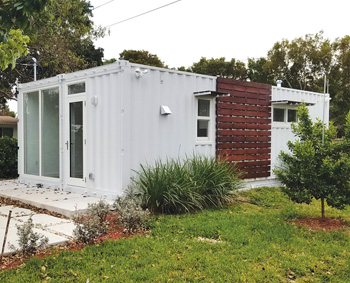 A former freight shipping container in South Miami sits waiting for the OK to be sold.

“This is a backed-up process,” Ms. Blake told Miami Today in December 2019. “The landscaping can’t be done until we lay the driveway, which can’t be done until the sewer lateral is laid, and we’ve been trying to get that connected with the county since July.” Still, she expected the home to be finished in January 2020.

She spoke of difficulties: “The county did the water connection. As I understand it, they also had to break through the street. But the sewer lateral, which is also under the Water and Sewer Department, is done privately through a general contractor.” So they wound up tearing up the road twice.

When we checked back last March, Ms. Blake said the home was finally almost ready and should be done by last May. But selling it required an eight-hour Department of Housing and Urban Development homebuyer counseling class so all qualifying potential buyers could enter a lottery pool. “From there,” she said, “we’ll have a lottery drawing.”

The onset of Covid-19 delayed work, she told us in June, with landscaping, the exterior HVAC unit, wooden baseboards, lights and interior doors still to go. She expected that to be done in a week. Then a study of the home’s financing would start.

But nothing about this has been easy.

“We’re kind of known down here for difficulty in permitting, construction and regulations,” association CEO Teresa King Kinney told us in September. “The idea was to figure out where the roadblocks were, what it took to get past them and what kind of suggestions, directions and assistance we could give to others who wanted to consider doing the same thing.”

The association will have plenty to tell anyone who dares takes up this challenge. As Ms. King Kinney told us, “It’s the last container home we’ll build.”

As if the litany of horrors wasn’t enough, Ms. Blake told us this month a new hurdle has arisen before the home can be marketed.

“It’s been finished for three months,” she said. “It’s just sitting there.”

That’s because a question arose of a set-aside of part of the 3,200-square-foot lot that no one had considered – not the association, the contractor, the initial survey of the property, the City of South Miami, the county or a now-defunct community redevelopment association that helped back the project.

“It’s been frustrating,” Ms. Blake told Miami Today reporter Jesse Scheckner, who has been covering the plan from its outset. “I just want to be done with this project.”

Not quite. Later that day Ms. Blake learned from the county that the set-aside was an error – but an even larger one might loom. It will be a few more weeks, Ms. Blake told us, before the county decides if that is really an issue.

If the realtors are fortunate and a second land set-aside doesn’t further slow an effort that’s now in its third year, the association can jump through the hoops of holding a meeting and a lottery and trying to actually sell the home.

This would make a cost-spiraling comedy like the old Cary Grant film “Mr. Blandings Builds His Dream House” if it weren’t deadly serious. The aim, remember, was not to profit but to turn an underserved group into homeowners.

The realtors were fortunate to start with $80,000 from the National Association of Realtors and $10 land from the county. To replicate this elsewhere, someone must do without that aid. With all the red tape and hurdles, the home’s real cost is probably far above market rate.

It need not be that way. Although the county voted to back the experiment, its aid ended with its land sale. No county official birddogged work to pave the way. That led to unnecessary duplications of effort, red tape, unreported set-asides and other roadblocks.

If the county wants workforce housing, officials must facilitate rather than impede it.

As reader Elizabeth Cooper-Garcia wrote to us a year ago, “To help with the affordability problem … cities and the county need to get together, get rid of those ‘unwanted lands’ that the tax department is holding and start donating those for similar if not larger projects and work with, not against, the creative developer that is willing to put forth affordable homes for regular Miami families seeking homes under $300,000.”

We know why the Miami Association of Realtors says its first container home will be its last. Who’d try again with all these roadblocks?

We give the realtors A+ for effort. If nothing else, they put on record the array of red-tape problems.

The county should pay heed: move fast to cut the red tape to make small-scale housing on surplus lands possible. When commissioners next OK workforce housing, the legislation should name a specific county official to expedite the job – even if it’s not on surplus county land.

Let’s stop paving the road with good intentions and pave it instead with vital coordination.

One Response to Miami-Dade should shepherd creative workforce housing