Advertisement
The Newspaper for the Future of Miami
Connect with us:
Front Page » Transportation » Miami Beach trolleys ready to roll again 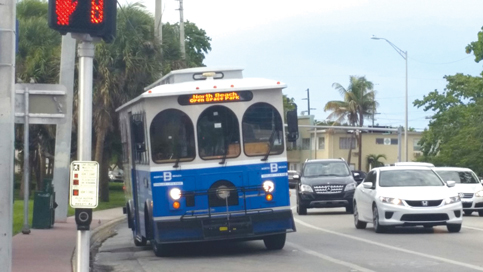 After nearly a year off the road, Miami Beach’s trolley service is to resume late next month with limited trips and safety measures in place.

Commissioners on Jan. 13 gave administrators the go-ahead to look into resuming services, which were suspended last March 26 amid public safety concerns and a drop in ridership of over 85%.

“It is worth noting,” Interim City Manager Raul Aguila wrote in a memo to officials, “that out of 28 municipalities in Miami-Dade County that provide local circulator services, only a handful suspended their services temporarily during the pandemic.”

“Moreover,” he continued, “none of the municipalities that suspended their circulator services provided a level of service or ridership comparable to the Miami Beach Trolley, which served over 14,000 trips daily prior to the pandemic.”

According to the memo, staff have received more than 200 inquiries about trolley service since the suspension – a number they estimate will rise as businesses continue to reopen.

Mr. Aguila told commissioners it would cost the city $4.1 million for the rest of this fiscal year to operate that trolleys at a reduced capacity, which would provide a savings of $7.7 million compared to a typical fiscal year.

Transportation Director Jose Gonzales noted that the city has more than $1 million in grants available from the Florida Department of Transportation earmarked for trolley service, which brings the total that could be spent on resumption of services up to around $5.2 million. Mr. Aguila said he had no objection to using the funds, which would allow for more trips and less wait time.

According to the memo, under the $4.1 million budget trolleys would roll seven days a week from 9 a.m. to 8 p.m., with 15 vehicles running daily and 30-minute average service frequency.

Staff will monitor demand on routes, the memo said, to allocate trolleys efficiently. Vehicle capacity will be limited to 10-12 passengers, and signage in English and Spanish will be posted in each vehicle promoting CDC-approved covid education and cautioning seniors and individuals with pre-existing conditions about riding. Trolleys, Mr. Aguila told commissioners, will be deep-cleaned every night by service provider LSF and inspected periodically by staff.

As seniors are discouraged from using the trolley, the city will continue to offer Freebee services for elderly residents living in affordable housing facilities in the city. The free ride-sharing service, the memo said, serves residents in 16 facilities seven days per week between 7 a.m. and 5:30 p.m. Seniors, except those living in Rebecca Towers, which has its own vehicle due to high demand, must call in advance to schedule a ride.

One Response to Miami Beach trolleys ready to roll again