Advertisement
The Newspaper for the Future of Miami
Connect with us:
Front Page » Transportation » Miami Beach extends and expands Slow Streets initiative 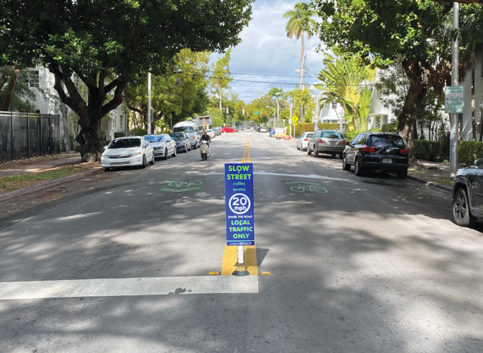 A Miami Beach pilot program aimed at encouraging walkers, cyclists and drivers to share the roads in Flamingo Park has been extended and expanded following a positive public response, city officials say.

The Slow Streets  pilot, which was set to begin in October and last one month, is now going into month three with no signs of discontinuation, according to Transportation Director Jose Gonzalez.

The program, Miami Today reported in October, is intended to make residential streets safer and more amenable to cyclists and pedestrians by discouraging through traffic and emphasizing a slow driving speed of 20 mph. While it originally only covered the Flamingo Park neighborhood, Mr. Gonzalez said it has been expanded to include the length of Pennsylvania Avenue to the north leading to Lincoln Road.

“I am thrilled with this pilot initiative,” said Commissioner Mark Samuelian, who sponsored the program.”It’s the result of a community-driven process. We have collaborated closely with the neighborhood. We have done multiple events to engage the community to get feedback. It has been a successful pilot so far, and we look forward to continuing to learn and enhance as we proceed.”

The next step, Mr. Gonzalez said, is rolling out $15,000 worth of updated Miami Beach-branded Slow Streets signs in the neighborhood, which indicate the 20 mph speed limit and encourage sharing the road. The signs, he said, will replace the construction signs currently addressing traffic, which are not as informative or aesthetic as they could be.

According to Mr. Gonzalez, the pilot program is evaluated based on factors such as traffic data, public safety statistics and community satisfaction surveys. The first survey conducted, he said, garnered 70% support from the neighborhood, and Assistant Transportation Director Josiel Ferrer-Diaz added that one group of residents took it upon themselves to ride or walk different segments of the pilot each day to help with signage upkeep.

“These were corridors where cars were maybe 60% or 70% of the traffic,” Mr. Gonzalez said. “Now we have 60% and 70% of the traffic being bicycle or pedestrian as opposed to vehicles.” Data on safety, he said, would take longer to reveal trends, but no more accidents have occurred in the area than usual.

“The city wants to deliver on its Transportation Master Plan,” said Mr. Samuelian, “which prioritizes pedestrians and cyclists. We need to make sure these alternative modes are safe and attractive, and this project is front and center in doing that.”

Other recent projects such as pedestrianizing Ocean Drive and adding protected bike lanes on Washington Avenue, he said, also furthered this goal.

The transportation plan, Mr. Samuelian added, focuses on these modes for a few key reasons. Cycling and walking, he said, is more eco-friendly than driving, and many members of younger generations prefer these methods and would like the option of not owning a car. Additionally, he said, from an infrastructure standpoint the city has a limited capacity for cars occupying the streets.

According to Mr. Gonzalez, more neighborhoods have requested to participate in the pilot and, while another expansion isn’t off the table, the immediate focus is on improving signage in the current area.