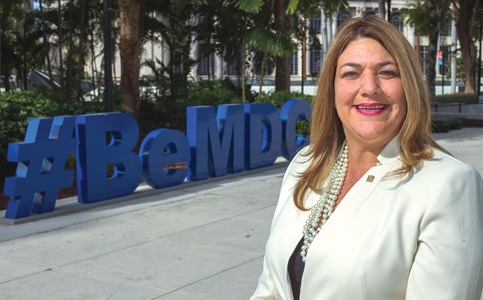 Throughout her long career in education, Madeline Pumariega has focused on breaking barriers both for students seeking access to college and professionals looking to follow her lead. This week, she will shatter another glass ceiling as she takes her place as the first female President of Miami Dade College, the largest community college in the US.

Ms. Pumariega, who was born and raised in Hialeah, has a long history with the college, where she began her undergraduate career as a basketball player before earning a bachelor’s degree from St. Thomas University and a master’s from Florida Atlantic University. After graduating, she returned to Miami Dade College as an academic advisor and continued to work there for 20 years, eventually serving as President of the Wolfson Campus.

Upon leaving she took a position as CEO of nonprofit Take Stock in Children, which focuses on breaking the cycle of poverty through education. The goal of creating pathways to success for first generation and low-income students, Ms. Pumariega said, is still on her mind as MDC’s new president.

No stranger to setting an example, Ms. Pumariega was the first female and Hispanic individual to be appointed Chancellor of the Florida College System in 2015. She oversaw 28 state and community colleges across Florida in this role before moving on to become the Executive Vice President and Provost of Tallahassee Community College, her most recent position.

As an athlete, Ms. Pumariega said, she left everything on the court. As a professional, she said, she is driven by the same passion and work ethic. And though she may be the first woman to hold not one but two prestigious positions within Florida’s educational community, Ms. Pumariega said she won’t be the last.