Advertisement
The Newspaper for the Future of Miami
Connect with us:
Front Page » Government » Wynwood votes down 12-story mixed-use project 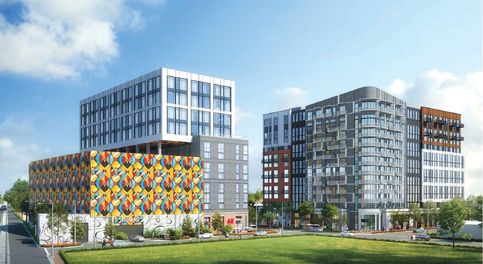 A sprawling mixed-use proposal plans to bring with it apartments and more than 60,000 square feet of office space to two lots in Wynwood.

Along with the new office space, the 12-story project is to include 317 residential units, 22,700 square feet of commercial-retail uses, and a garage for up to 534 vehicles.

The Wynwood Design Review Committee recently voted to recommend denial, after itemizing concerns about the project.

After the meeting, attorney Iris Escarra said the developer appreciates the committee comments, is seeking to incorporate them into the design, and will submit updated plans to the City of Miami’s Planning Department for consideration by the Urban Development Review Board early in 2021.

Ms. Escarra said the committee requested that the applicant consider the following items:

■Emphasize the lobby entrance at the East Tower.

■Break up the retail/pedestrian façade on North Miami Avenue (East Tower) and Northwest 22nd Street (West Tower) by bringing the vertical elements to the ground level.

■Further articulate the garage screening on the East Tower.

■Add landscaping on the north setback area of the East Tower.

■Reconsider the architectural treatment on the West Tower at the northeast corner, including changing of the curved balconies.

Brian A. Dombrowski, an attorney also representing the developer, wrote to the city saying the site plan was prepared by CFE Architects.

He said the property consists of 95,090 square feet or 2.182 acres. The existing structures at the property are to be demolished.

“The Property has a Principal Frontage on N Miami Avenue which bisects the Property. The Property fronts NE/NW 22 Street to the North comprising the Property’s Secondary

Frontage, with NW Miami Court on the West being a Secondary Frontage as well,” wrote Mr. Dombrowski.

The site has the FEC Railway tracks to the east and commercial properties to the south.

The property is to be developed with a 12-story mixed-use structure consisting of retail, office, and residential uses.

The east parcel would be of retail space at the ground level, a 7-level parking garage lined on the east façade with residential units up to the 8th level, and office space up to the 12th level.

The west parcel would have retail at the ground level, residential units up to the 12th level and amenity spaces for the residents.

The developer is requesting waivers including:

■To permit up to a 10% increase in the maximum floorplate length above the 8th story for residential uses. This waiver is requested in order to create an effective design.

One Response to Wynwood votes down 12-story mixed-use project