Advertisement
The Newspaper for the Future of Miami
Connect with us:
Front Page » Education » St. Thomas University hub focuses on minorities and vaccine 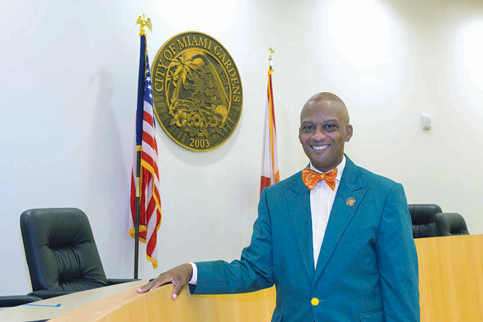 St. Thomas University’s Center for Pandemic, Disaster and Quarantine Research (PDQ) fell about halfway short of its $1 million goal of grants issues it planned for small businesses and local aid organizations, according to figures the school provided Tuesday.

The center received 55 applications for grants between late November and mid-December, said Robyn Hoffman, the school’s vice president of philanthropy. It ended up giving out 23, of which all but two were for $5,000 or less.

“The narrow turn-around time for the applications likely resulted in some applicants being unable to compile the requisite documentation,” Ms. Hoffman said by email.

The next big focus, PDQ Director Oliver Gilbert III said, is boosting public confidence in the safety and efficacy of Covid-19 vaccines in Hispanic and Black communities.

“Right now, the cooler and dinner table talk might not actually be factual talk, and we’ve heard all types of rumors and skepticism that really aren’t based on facts about vaccinations,” he said. “One of the troubling things I saw was that only 26% of Hispanics and only 20% of Black people in Dade County say they’re going to take it. That’s something that has to be talked about.”

Last week, the PDQ hosted a virtual panel – one of several the center has held regarding the pandemic since late May – in which experts talked about the vaccines and how to improve trust in them.

Mr. Gilbert said the panel will be the first of a few on the subject, including at least one with all Spanish-speaking presenters.

“We’re going to be probably leaders in that area, because we have the ability to gather and convene academics and persuasive voices on it, and we’re also tied to the community,” he said. “You can’t say enough about how St. Thomas University, an offshoot of the Archdiocese of Miami, also being an important part of the largest Black city in the State of Florida. We have credibility in the community.”

In late October, after Mr. Gilbert was elected to the Miami-Dade Commission but before he took office, county commissioners approved giving St. Thomas University $3 million from the county’s cut of Cares Act dollars to develop the PDQ, which opened in the university’s rechristened and recently renovated Gus Machado School of Business.

While $2 million would go toward building out the center and broadening its capabilities and programming, the plan was to spend the remaining third helping local businesses, mostly in Miami Gardens, through grants, President David Armstrong told Miami Today in November.

The PDQ had to move fast. County commissioners OK’d the funding apportion more than two months before the federal government’s now-revised Dec. 30 deadline, but Mr. Armstrong said the funds took weeks to reach the university, which had to get the grants out by Dec. 15.

The center ultimately gave out $487,758.64, according to a breakdown of PDQ grantees that listed $312,000 for the Center for Black Innovation, formerly Code Fever Miami, and $75,000 for the Foundation for Sickle Cell Disease Research.

Online, the PDQ said small business grants of up to $10,000 were available.

The PDQ use part of the remaining two-thirds of its Cares Act allocation on providing locals with various resources, including, tax clinics to help companies prepare for tax season, financial guidance for businesses planning to apply for a new round of Paycheck Protection Loans and residential workshops for tenants and landlords.

“There are a host of issues related to foreclosures,” Mr. Clark said. “We have issues with respect to employment in the community. There are constitutional issues, tax issues. At any given moment, [any] of those issues gravitates toward the top of [people’s] concern, and the key for us as an organization is making sure we remain flexible and that we utilize all the resources within the university.”

Online, the PDQ’s webpage continues to grow with links to helpful information and materials, a survey aimed at tracking “the long-term influence of the Covid-19 pandemic on small businesses” and videos of past meetings, seminars and one-on-one talks Mr. Rocha hosts called “PDQuatros.”

In the short term, the PDQ has prioritized the pandemic. But long-term, St. Thomas’ ambitions for the center are much greater Ms. Hoffman said, echoing sentiments Mr. Armstrong previously expressed.

“It will become this vast community resources,” she said. “We will be an active partner in helping our community move through this situation and onto new horizons out of collaboration with the community.”

Ideally, those horizons stretch well beyond the borders of Miami-Dade, a county that is no stranger to natural disasters biological and weather-based, Mr. Gilbert said.

“We didn’t get the type of disasters we typically plan for this year. We plan for hurricanes. How do you have continuity of business, government, education and all those things not just during a pandemic with all this other stuff? We’ll delve into that,” he said. “If you push this out, draw it out a couple years, we’ll be thought leaders nationally on this.”