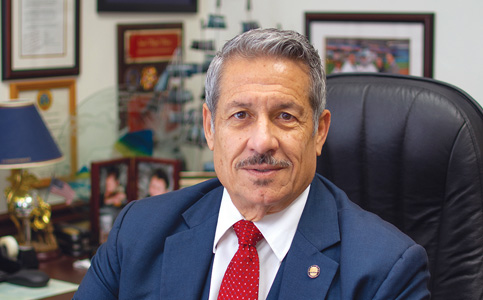 When Jose “Pepe” Diaz takes over as chairman of the Miami-Dade Board of County Commissioners this month, he’ll assume control of a governing body whose regular responsibilities were only intensified in 2020.

To effectively tackle future challenges, many the result of a global pandemic from which the county is still recovering, he said, he and his peers must be focused, proactive and forthcoming.

“Government has a traditional role, but after what we’ve learned, government has an expanded role, and that will be key in moving forward in my chairmanship – being more resilient, finding new ways to make sure we build our economy stronger and faster and making sure people are protected, that the water they drink is good, that the seaport and airports are working, traffic signals work and potholes are covered,” he said. “My colleagues and I have a big role, not only working with the new mayor but in finding ways to make government more efficient and transparent.”

Mr. Diaz enlisted in the US Marine Corps in 1979. An injury on the way to his permanent station forced him to stay in the reserves until he was honorably discharged six years later.

While at home attending college, he worked briefly as an auxiliary police officer for the City of Sweetwater, his longtime home. Then his family “hit hard times,” he said, and he went into the insurance business to help put food on the table.

“But I always helped as much as I could in Sweetwater,” he said. “I ran the pension fund for the police department. Then I was asked to put my name in for an appointment that was being done for a councilmember who’d passed away. A year later, I ran for office and won my seat on the city council.”

Eight years later, in 1999, he ran for mayor and also won. Flooding by then had become a major issue not just in Sweetwater and other cities here but for the entire county. He made it his pet project, learning what he could and identifying solutions, including pump stations and related facilities that now are the norm in many places for handling floodwater.

“A lot of the issues we had in the city had plagued us for many years, but the flooding issue had gotten to the point after the ‘no-name storm’ that it was county-wide,” he said. “It molded me to find solutions and ways to improve the role of government, stepping it up. I had the opportunity at the time to run for the county commission seat for District 12, and I got elected.

“I became known as the flooding guru because of everything I had to learn. We traveled to Tallahassee to get funding, ended up going to Washington, DC, to bring the FEMA director down here to see the flooding and were able to acquire over $740 million for the issue.”

The experience, he said, reinforced his belief in what hard work and determination can achieve. It still informs his work today.

“I learned that no problem is too great or small,” he said. “You can learn from everything, and it’s important to be humble to be in a position to make a difference.”