Advertisement
The Newspaper for the Future of Miami
Connect with us:
Front Page » Government » Miami International Airport may forgive tenants $107 million 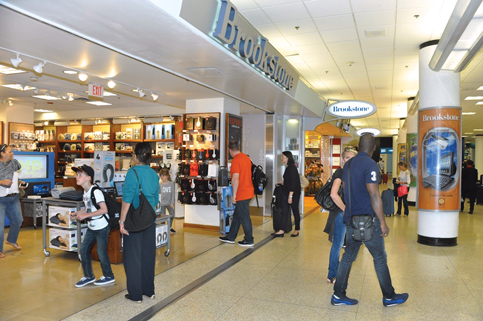 Non-airline businesses struggling to make ends meet at Miami International Airport (MIA) got another lifeline this month, when Miami-Dade commissioners again extended a relief program they created eight months ago.

If every company cleared for aid through the program takes advantage of it through the new April 30, 2021, deadline, MIA over 13 months will have forgiven more than $107 million in previously guaranteed payments.

MIA is self-financing and, as such, has not used taxpayer dollars to cover costs, Aviation Director Lester Sola said during a Dec. 15 discussion of the relief extension.

Instead, the airport has waived monthly rent and other guaranteed payments dating back to March 1 for more than 60 airport tenants, including duty-free shops, restaurants, luggage wrappers, car rental companies and one airline assistance business.

The airport has waived $8,236,164 per month since March, according to Sergio San Miguel, chief financial officer for Miami-Dade Aviation. Between Jan. 1 and April 30, MIA will waive another $33 million in fees and rent.

The concessionaires and lone fixed-base operator must still pay MIA around 15% of their monthly gross sales. In March, they jointly paid more than $4.3 million. One month later, when passenger movements at MIA plummeted to their lowest point in 2020, the companies paid just $558,913.

But the amount grew each month since through November, when the companies together paid nearly $2.7 million.

In addition to extending the relief program a third time, the authorizing item by Rebeca Sosa, who sponsored the original item, directs Mayor Daniella Levine Cava’s office to deliver “a forward-looking long-term plan to provide financial assistance to concessionaires at MIA” by mid-April.

“At the very least,” the item said, the plan should “explore potential changes to existing concessionaire contracts and examine the impact of passenger volumes in relation to revenues generated” at the airport.

“Since there are no passengers or very little passengers, it’s very difficult for us to hold these companies to pay us what they had guaranteed,” Mr. Sola said. “What this resolution also does is direct the administration to renegotiate or look at a pathway forward so that we don’t have to keep providing relief should there be any more economic downturns in the airport industry.”

In normal times, MIA – which in April received a $207 million Cares Act grant to sustain operations during the pandemic – averages 105,000 to 115,000 passenger movements per day. In mid-March, the number fell to 3,500 daily passengers. Through Nov. 29, year-to-date passenger traffic at MIA was just 41% of what it was in 2019, according to figures spokesperson Greg Chin gave Miami Today.

The same should be done for the thousands of small businesses in Miami-Dade at risk of closing due to Covid-19, Commissioner Rene Garcia said.

Chairman-elect Jose “Pepe” Diaz, a co-sponsor of the original item Ms. Sosa sponsored April 7, noted that most of the businesses receiving relief are mom-and-pop businesses, and those that are national firms have locals working for and running them.

As one of the county’s two major economic engines, the health of MIA and the businesses there heavily impacts the wellbeing of residents and businesses countywide, Vice Chairman-elect Oliver Gilbert III said.

“One of the real concrete truths, a law of physics for our economy, is that we really depend on tourism and people coming to that airport,” he said. “It’s not just the big people who are millionaires. It’s the people who are checking you out and helping you with your bags.”

And it’s a lot people – 275,708 based on recent figures, Commissioner Raquel Regalado said.

“That’s $31.9 billion to our economy,” she said, suggesting Mr. Garcia tour the airport. “When you see how empty it is and what people are going through to keep those sites open, it’s really concerning.”

Eileen Higgins agreed. On many visits to MIA this year, she said, she was the only person in a store at any given time.

“These concessionaires are doing their best to employ people, which in my opinion is our No. 1 priority, to keep people having paychecks, being able to pay their mortgages and support their family,” she said.

Mr. Garcia asked to clarify his prior comments. He said he was for the relief program and thought Mr. Sola had done a great job guiding the airport through a troublesome time. He only wanted to make sure taxpayers weren’t paying for it and that more help would come to small businesses elsewhere in the county.

“Maybe I may have an accent or maybe sometimes I don’t express myself clearly or maybe it’s because I have this mask,” he said. “Our small businesses across the community are hurting as well. Unfortunately, they may not have a structure like we have at the airport right now, and I’m asking the administration to please put together a plan that we can also look to to make sure that we bring relief to [them].”

One Response to Miami International Airport may forgive tenants $107 million