Advertisement
The Newspaper for the Future of Miami
Connect with us:
Front Page » Top Stories » County extends fee waivers for PortMiami cruise ships 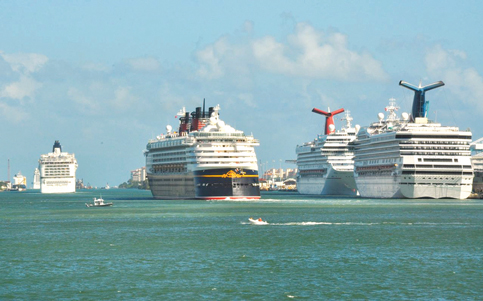 PortMiami’s more than nine-month waiver of berth and harbor fees for home-ported cruise vessels will continue through Jan. 31.

Between then and now, Mr. Giménez extended the port waivers to its cruise partners four times. This is the first time Ms. Levine Cava as mayor has extended the waivers to reflect a voluntary extension of suspended US cruise operations by the Cruise Line Industry Association – which represents 95% of the global sea cruise capacity, according to its website – through Dec. 31.

“Miami-Dade County will continue to support our cruise line partners through these unprecedented times,” Ms. Levine Cava said in a statement. “As we await the safe return of cruising, we will maintain our commitment to our stakeholders who have shown great resilience during this crisis.”

In April, shortly after issuing the no-sail order, the CDC released a list of 28 sailings on 21 cruise ships in February and March that had onboard Covid-19 cases. Several, including three of the world’s largest cruise ships – MSC Cruises’ MSC Meraviglia and Royal Caribbean’s Symphony of the Seas and Oasis of the Seas – sailed from PortMiami.

On Nov. 1, the CDC ended the no-sail order and published an order setting a “framework for a phased resumption of cruise ship passenger operations” through Nov. 1, 2021 – or when the US secretary of Health and Human Services declares Covid-19 no longer a public health emergency or the CDC director rescinds or modifies the order “based on specific public health and other considerations.”

The initial phase, the order said, will include testing and “additional safeguards” for crew members and a requirement that cruise ship operators “build the laboratory capacity needed to test future passengers.”

Future phases “will include simulated voyages to test cruise ship operators’ ability to mitigate Covid-19 risk, certification for ships that meet specific requirements and a phased return to cruise ship passenger voyages in a manner that mitigates Covid-19 risk among passengers, crew members and US communities.”

The CDC said the benefits of adopting the new framework “outweigh the costs of not allowing cruise ships to sail because it allows for flexibility where cruise ships have taken the necessary precautions to mitigate risk, while continuing to prohibit passenger operations onboard ships that have failed to implement such precautions.”

Last month, Miami-Dade commissioners approved a bailout for the county’s cruise partners that, in a worst-case scenario where ships remain docked for two-plus years, would see the port lose $285.5 million.

Were that to happen, a memo from Regulatory and Economic Resources Director Jack Osterholt said, the port would be forced to dip into reserves to remain operational past April 2021. In exchange, Miami-Dade asks only that cruise lines continue to guarantee vessel calls, maintain passenger volumes here relative to other US ports and possibly meet added requirements “on a cruise line by cruise line basis.”

Known as the “Cruise Capital of the World,” PortMiami’s business in 2020 shifted toward cargo in response to the pandemic. And it paid off, according to figures released last month showing a 1.5% uptick in import-export numbers compared to 2019 – the highest in the port’s 80-plus-year history.

Fiscal year over year, PortMiami sea cargo dipped just 4.8%, a “significant achievement,” Director Juan Kuryla said, “considering the economic conditions worldwide [and that] some countries have not yet totally opened up.”