Advertisement
The Newspaper for the Future of Miami
Connect with us:
Front Page » Transportation » County-developer deal around Dolphin Station nears 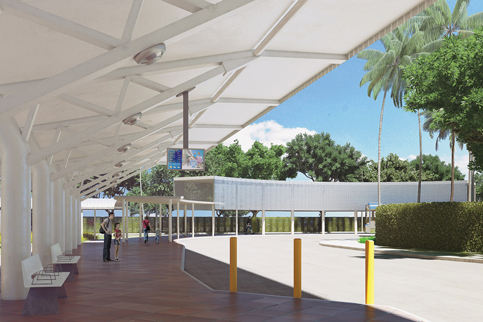 Negotiations with an unnamed company to develop up to 44 acres around Dolphin Station in West Dade are nearing the homestretch, says the project’s chief supporter, Miami-Dade Commission Chairman-elect Jose “Pepe” Diaz.

“They have somebody,” he told Miami Today this month, adding that few details can be discussed due to a hush rule for active bids. “It’s still in the cone, but I’m really looking forward to seeing who won that particular procurement. I can’t wait. It’s something I’ve been working on for a very long time.”

Land targeted for development in a draft request released in January 2020 includes 34 acres beside Dolphin Station, which opened in March at Northwest 117th Place in Beacon Lakes, and “optionally” 10 acres around the station itself, including air space above it.

A qualifying builder is to have “a proven track record of undertaking and successfully completing profitable, large-scale, multi-component, mixed-use developments,” the draft said.

Dolphin Station’s proximity to the 836 and Florida Turnpike “translates to high development potential” despite “a severe space restriction due to the on/off ramps between [the Turnpike] and SR 836,” county engineering consultant WSP said in an October 2016 report.

WSP wrote that a development should include three- to five-story buildings with “active ground floor use,” a “cluster of mid-density apartments and office buildings” within a five-minute walk of the station, a park and open spaces linking to the Kitty Roedel Trail and a “series of passive recreation spaces” around nearby stormwater detention ponds to allow the site to be both a stormwater storage area and a community gathering space.

“This is a big one,” Mr. Diaz said. “It’s a huge part of transportation. These types of transit hubs and facilities are extremely important to spread out throughout the community. It only helps us, and we should take more advantage of them and make sure we do more.”

Dolphin Station will be a key stop along a 14-mile route linking West Miami-Dade to Miami International Airport and downtown Miami.

Elected officials in October approved “gold standard” rapid bus as the preferred upgrade for the route, known as the East-West Corridor of the Miami-Dade Smart Plan.

The version of the plan officials adopted includes three Metrorail-like elevated stations in the center of SR 836, accessible by riders from below, and nine curbside stations on arterial roadways.

The project would cost about $418 million and up to $25.6 million per year to operate and maintain once both construction phases end. It would build upon the express bus service on the 836, temporarily suspended during the pandemic.

“I see that getting back into shape [after the pandemic passes],” Mr. Diaz said.

Funds for the project, which qualifies for federal Small Starts dollars to cover a third of construction costs, haven’t been secured.

The plan assumes another third would come from the state, with Miami-Dade covering the rest. Toll revenues would cover operations and upkeep.

From start to finish, WSP estimated the project would take two to three years to build.

“Eventually,” Mr. Diaz said, “maybe in the future, there’s some kind of rail to improve things down the road.”