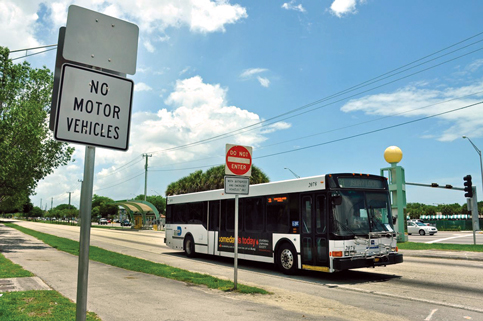 The plan for bus rapid transit (BRT) on the South Dade Transitway is intact – for now – as Miami-Dade commissioners Tuesday punted two items targeting further action on the corridor.

Talk of other changes, including building toll lanes and bridges on the 20-mile route that runs alongside US 1 between Kendall and Florida City, will come today (12/17).

After hearing from the public and other commissioners, Raquel Regalado and Kionne McGhee each asked to defer a resolution concerning the transitway.

Mr. McGhee’s item, had it advanced, would have directed Mayor Daniella Levine Cava’s administration to wait 60 days before telling OHL USA, the firm that won a $368.2 million contract to build infrastructure supporting BRT on the busway, to proceed.

County staff would use the extra time to “examine other feasible transit modes, such as light or heavy rail,” and then recommend whether to proceed with the contract, suspend it or kill it.

Ms. Regalado changed her item several times since placing it on the agenda last week. The resolution initially called for the county to consult federal and state transportation agencies on the feasibility of erecting bridges over intersections along the transitway (instead of preferential signalization and crossing gate arms in the current plan) and adding vehicular toll lanes beside it to help pay for a future conversion to Metrorail.

The last revision, which she submitted Monday, would tell the mayor’s office to work on creating uniformity among the route’s state- and county-controlled intersections “to mitigate any deterioration in traffic operation conditions…”

That work wouldn’t affect BRT there, she said, as it would come after it’s built.

The toll lanes and bridges pieces aren’t gone. Rather, Ms. Regalado put them in a separate item going before the transportation planning board today. Instead of bridges, the item calls for “grade separation” – overpasses or underpasses.

The transitway is the only corridor in the Smart Plan – an initiative to upgrade six high-volume commuting routes across Miami-Dade with premium transit – to get state and federal funding matches ($100 million apiece), finished designs, local approval and a development contract.

The BRT plan uses about 12% of available Smart Plan funds. Rail would use about 75%, county estimates show.

Ms. Regalado told Miami Today that many residents “want something better that at least moves us toward rail, and the current plan doesn’t.”

Transportation Director Alice Bravo reconfirmed Aug. 31 that stations and intersections will be designed to facilitate future conversion to rail. The plan the county adopted in October 2019 includes a proviso to convert the corridor to rail once daily boardings on BRT reach 35,000.

But many in South Miami-Dade today “feel trapped … without a form of rail, [as] small businesses will not be attracted to the south,” Mr. McGhee said.

Eileen Higgins, who in February flew to Washington, DC, to get the project rated in time for funding this year, said she worried re-litigating its details could jeopardize its funding and that of other Smart corridors.

“We need to be moving forward,” she said. “We cannot be sending mixed signals to the state [or] federal government.”