Advertisement
The Newspaper for the Future of Miami
Connect with us:
Front Page » Top Stories » Miami-Dade may bite into food delivery commission that restaurants pay in pandemic 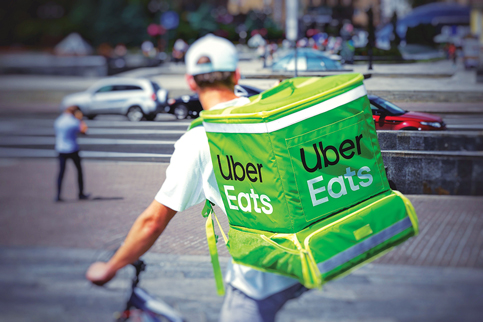 After months of reports and cries for help from the restaurant industry, Miami-Dade lawmakers have begun talks of doing something about food delivery app commission fees.

With apps charging up to 30% per order all but wiping out restaurant profits on deliveries, Miami-Dade has is a big problem on its hands, particularly for local and independent businesses, Commissioner Jean Monestime said Dec. 7.

“In the best of times, these delivery app commissions can be predatory. During Covid-19, they can even be catastrophic,” he said. “They’re causing restaurants to not be able to reach their bottom line, [and] we will see many restaurant employees – waiters, cooks, chefs – not able to pay their bills. That will be definitely detrimental to this county if we continue to see more people laid off and not being able to make ends meet.”

The four main delivery apps – DoorDash, Grubhub, Uber Eats and Postmates, the last two of which have agreed to merge by March 30 – charge restaurants commissions to process orders. They charge additional fees for delivering orders and even more to promote businesses with various in-app customer incentives, such as a $10 discount on orders of $30 or more.

Restaurants can pick and choose which services they want to use in order to best accommodate their budgetary constraints, and there are also related costs the delivery companies bear independent of their restaurant partners, Uber spokesperson Javier Correoso said.

“There’s background checks for the delivery folks. There’s pay in terms of mileage and time. There’s the platform we have to operate in order to process these orders,” he said. “During the pandemic, there’s been over 25,000 workers here in South Florida that have delivered on Uber Eats, so there has been a significant economic impact, and we have been a major resource for helping restaurants survive.”

Some restaurant owners disagree. Stephanie Vitori, who owns Cheeseburger Baby in Miami Beach, told the New York Times this month that the fees were manageable when deliveries made up a smaller chunk of sales. Now that they make up almost 90% of sales, she said, “It’s not sustainable at these rates. The fees are killing my business.”

Before the pandemic, many small restaurants paid the fees because they believed they had little leverage to do otherwise, wrote Maureen Tkacik in a September report for antitrust research advocacy group American Economic Liberties Project.

“[Once] the pandemic shut down most dining rooms, wiping out more than $145 billion in restaurant sales between March 1 and June 30, thousands of chefs realized that staying open to feed the delivery apps would bankrupt them,” she wrote.

At last week’s meeting, Mr. Monestime said he’d hoped to hear from other restaurant owners, but a Florida rule barring public comments sent online from being heard during government meetings prevented those he’d invited to speak from doing so.

Not that it’s helping delivery drivers much anyway, he said, citing a January study by wage and labor advocacy non-profit Working Washington, which found that drivers for DoorDash earned an average $1.45 per hour after accounting for expenses.

Food delivery apps were already on the rise before the arrival of Covid-19, with Uber Eats as one example reporting a 71% increase in gross bookings in the fourth quarter of 2019 compared to the year prior.

Between April and September of this year, however, the “big four” delivery app companies earned about $5.5 billion combined, more than double what they did in the same period in 2019, SEC filings show.

Meanwhile, municipalities are stepping in to help restaurants survive and shoulder the added costs that come with relying on delivery platforms to continue doing business during the pandemic.

North Miami in August agreed to reimburse up to $5,000 a month, per restaurant, of what restaurants in the city’s community redevelopment district pay the delivery app companies.

Two months later, Miami Beach commissioners voted unanimously to give $60,000 in grant funds – up to $1,000 per restaurant – to “help our mom and pop restaurants by filling in for some of their incurred fees as they shifted to delivery-centric business models,” Mayor Dan Gelber said.

The city expected the money would only help about 10% of its 628 registered businesses.

Mr. Monestime said that while Miami-Dade should look beyond Florida’s borders for examples of how best to reform the apps’ fee systems, the county’s achievable solutions will probably resemble what cities here have already done.

In the past six months, state and local governments in Seattle, San Francisco, Portland, Los Angeles, New Jersey, New York City, Cincinnati, Philadelphia and Washington, DC, among others, passed emergency orders capping to between 10% and 20% the fees the platforms could charge restaurants.

Miami-Dade could do something similar, Mr. Monestime said, but such a move would essentially be symbolic without help from leaders in Tallahassee whose repeated preemption of local regulation predates the pandemic but has since been magnified by it.

“The State of Florida, if we try to do anything, will definitely preempt us from capping any fees as they’ve done in regard to many legislations that affect our community,” he said, adding that he planned to ask county attorneys to work on a resolution to urge state legislators to consider stronger action.

Commissioner Eileen Higgins agreed that leaders in Tallahassee would oppose a locally imposed cap “because they don’t often like individually tailored rules.”

Besides, she said, putting a cap on fees that delivery apps can charge restaurants will likely just shift the cost to residents.

“It’s certainly something we need to look into and talk about more deeply to understand,” she said. “There’s two needs for this. It’s the restaurants, but it’s also the residents who are helping to still keep our businesses alive but eat and dine safely in their own homes.”