Advertisement
The Newspaper for the Future of Miami
Connect with us:
Front Page » Top Stories » Lincoln Road facelift plans may face downscaling 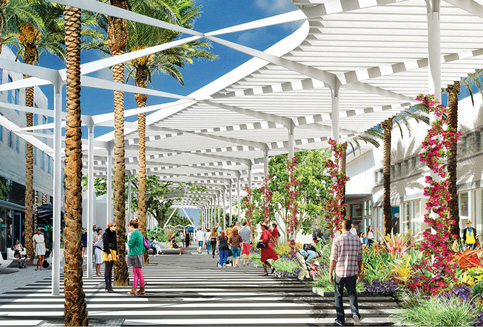 Lincoln Road is up for a facelift, but Miami Beach city staff and stakeholders are looking to reduce the scope of the original Lincoln Road Master Plan to minimize impact on local businesses and meet a narrower budget necessitated by the pandemic’s financial impacts on the city.

This week, commissioners are to discuss a resolution that would downsize the project’s budget from $67 million to $52.4 million and ask contracted architecture and engineering firm James Corner Field Operations to produce new drawings fitting the revised plan.

Tim Schmand, executive director of the Lincoln Road Business Improvement District, told Miami Today in September that one of the most costly and intrusive elements, a mass removal and renovation of the street’s sidewalks, is the first item on the chopping block. With local businesses hit hard by the coronavirus, he said, removal of sidewalks could pose accessibility challenges to already-ailing shop owners.

The goal, Mr. Schmand said, is to “refresh the road” by improving pedestrian, seating and cultural space and polishing architectural and landscape elements.

Beach administration, the memo said, is hoping to maintain many elements of the original plan including restoration of fountains, landscape elements, seating areas, signage, “piano keys” and the Lapidus’ follies. Other improvements will include infrastructure upgrades at Meridian and Drexel avenues and the installation of a playground.

Infrastructure improvements on Meridian and Drexel avenues, it said, include water, sanitary sewer and storm drainage upgrades as well as pedestrianization of Drexel Avenue.

A security barrier system including plantings, bollards and follies is still on the table, which Mr. Schmand said in September was an important aspect of the project for stakeholders hoping to get rid of the “Jersey Barriers” that currently block traffic on the road.

Construction costs for the modified plan, to be built by Burkhardt Construction, will be $34 million to $36 million, according to the memo. The project budget of $52.4 million, it said, also includes labor, materials, contractor fee and contingency, the cost of plans, specifications and surveys, architecture and engineering, legal expenses, permit and city fees and owner’s contingency.