Advertisement
The Newspaper for the Future of Miami
Connect with us:
Front Page » Transportation » Heralded Underdeck park beneath I-395 still lacks plans and costs

Heralded Underdeck park beneath I-395 still lacks plans and costs 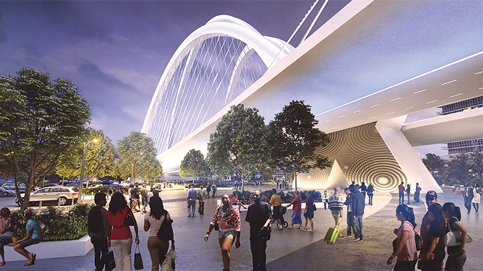 The Underdeck, a 33-acre downtown Miami illuminated park underneath a redesigned I-395, is well underway and should be completed by fall 2024, the Florida Department of Transportation says. But firm plans for the community spaces there are still six months off and costs are unknown.

“The City of Miami, in partnership with FDOT and other stakeholders, continues to work on the design of the community spaces that will be constructed under the new I-395 bridges,” said Tish Burgher, Department of Transportation communications manager. The higher elevation of the new bridges and reduction of columns from 800 to 200 will allow for the construction of amenities below for residents and visitors.

The area under I-395 will include a pedestrian pathway from Northwest Third Avenue to Biscayne Boulevard, including a pedestrian bridge over the Florida East Coast Railway.

“The community spaces design is ongoing,” Ms. Burgher said, “and a concept plan is expected in mid-2021.”

As for current milestones in the project, Hans Maichel, a real estate manager at the city’s real estate and asset management department, said, “Substantial progress is being made. FDOT recently secured $22 million for the construction of The Underdeck and pedestrian bridge, as well as the removal of the earthen berms currently surrounding I-395.”

Costs for The Underdeck are pending, Mr. Maichel said. “FDOT is waiting to receive additional information from the contractor regarding line item quantities and unit prices to estimate construction costs.”

Once this information is received, he said, the city and FDOT can create a consensus plan detailing the next steps related to building The Underdeck.

“It’s very important to us that we stay true to the city’s proposed design,” Mr. Maichel said, “and that we build upon the city’s community engagement.”