Advertisement
The Newspaper for the Future of Miami
Connect with us:
Front Page » Real Estate » Signature bridge rising as contractor pumps out water 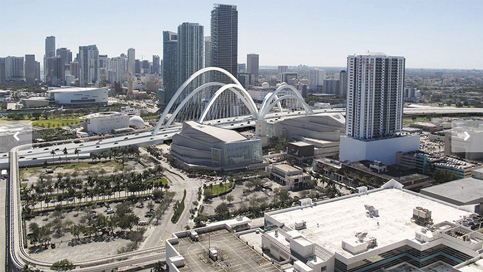 Work forges ahead on the expansive I-395/SR 836/I-95 Design-Build Project in Miami, a project of the Florida Department of Transportation (FDOT) in partnership with the Miami-Dade Expressway Authority and its contractor, the Archer Western-de Moya Group Joint Venture.

Work along I-395 from I-95 to the MacArthur Causeway; SR 836 from west of Northwest 17th Avenue to I-95 and on I-95 from Northwest Eighth Street to Northwest 29th Street is ongoing day and night, said Oscar Gonzalez III, senior community outreach specialist, in an email to Miami Today.

The wide-reaching project includes a “Signature Bridge” over Northeast Second Avenue and Biscayne Boulevard, an upper deck of traffic built over SR 836 and the Miami River, and the addition of one lane to the northbound entrance to I-95.

“The contractor continues to install bridge segments in the area west of Northeast First Avenue and just north of the existing I-395,” wrote Mr. Gonzalez.

A second segmental installation crew has started work in the area just west of Northwest First Avenue and south of I-395.

He said both crews have installed approximately 157 individual bridge segments, each weighing between 50 and 90 tons.

In all, over 1,800 segments will be used to construct the new I-395 bridges. The Auger Cast Pile (ACP) operations for two of the four arches that will be constructed during this phase have been completed.

“The contractor is currently working on the ACPs for the two other arches, which are located east of SR 5/US 1/Biscayne Boulevard between NE 13th Street and I-395. The remaining ACPs for the last two arches will be completed at a later stage of construction once sections of the existing I-395 are removed,” Mr. Gonzalez wrote.

To date, approximately 600 ACPs have been installed for the signature and segmental bridge foundations.

Mr. Gonzalez said the floor of the center pier foundation, which has 128 ACPs, has been poured and the contractor is currently utilizing pumps around the clock to remove the water from the footer so crews can begin forming the steel for the footer.

Foundation work and pier construction continue adjacent to I-395 from North Bayshore Drive to west of Northwest Third Avenue.

Construction of the new double-decked section of SR 836 and the widening of the eastbound SR 836 ramp to northbound I-95 from one lane to two lanes is ongoing.

The contractor has removed the center section of SR 836 from Northwest 12th to 17th avenues, which allows the contractor to continue installing ACPs and constructing the piers that will support the double-decked section.

ACP operations are ongoing just east of Northwest 17th Avenue, and more than 190 of the 492 ACPs for the new SR 836 bridges have been installed to date.

Mr. Gonzalez wrote: “On Saturday, Nov. 21, the new ramp from southbound NW 17 Avenue to westbound SR 836 opened. This has improved traffic flow in the area and enhanced access to SR 836.”

The contractor continues footer and pier construction for the addition of the second lane for the eastbound SR 836 ramp to northbound I-95, which is scheduled to be opened to traffic in the summer of 2021. Drivers should expect nighttime closures on SR 836 and the ramps at Northwest 17th Avenue, Northwest 12th Avenue, and ramps to and from I-95, says FDOT.

Concrete pavement work on I-95 continues nightly and is over 80% completed on northbound and southbound I-95 between Northwest Eighth and 29th streets, said Mr. Gonzalez.

The contractor has been deploying specialized grinding equipment during the overnight hours to smooth out the new concrete pavement. The contractor has also begun replacing the bridge approach slabs for I-95 bridges between Northwest Eighth and 29th streets.

He said drivers should expect nighttime closures including full closures of I-95 as well as closures of the ramps at Northwest Eighth Street, I-395 and I-195 in order to complete the pending work.

The contactor is expected to complete the concrete pavement replacement work on I-95 in the first quarter of 2021.

“The completion of this work will reduce the number of lane closures needed on I-95 within the project limits and enhance safety and rideability of the roadway surface,” wrote Mr. Gonzalez.

The City of Miami, in partnership with FDOT and other stakeholders, continues to work on the design of the community spaces that will be constructed under the new I-395 bridges.

Mr. Gonzalez said the higher elevation of the new bridges and the reduction of the number of columns will allow for the construction of amenities for residents and visitors.

The area under I-395 is to include a pedestrian pathway from Northwest Third Avenue to Biscayne Boulevard including a pedestrian bridge over the Florida East Coast (FEC) railway. The design of the community spaces is ongoing, and a concept plan is expected in mid-2021.

The entire project is expected to be completed in the fall of 2024 at a cost of $818 million.