Advertisement
The Newspaper for the Future of Miami
Connect with us:
Front Page » Top Stories » Orange Bowl, national championship set to spotlight Miami 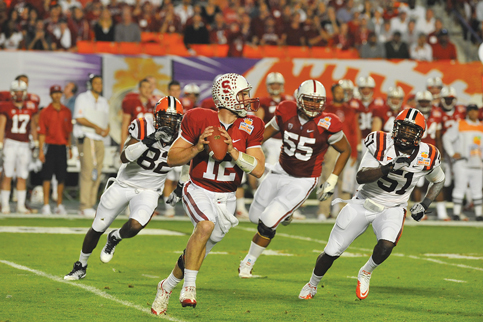 Major sporting events from March Madness to the Summer Olympics in Tokyo were called off this year as Covid raged, but in January some of ESPN’s biggest properties will return to the big screen and place a major spotlight on Miami.

On Jan. 2 and 11, respectively, the annual Capital One Orange Bowl and College Football National Championship will kick off at a reduced-capacity Hard Rock Stadium, just ten months after Super Bowl LIV brought in $571 million to the county.

As Miami-Dade and the US continue to fight the pandemic, host committee members of both games said the events will look different because large-scale productions like concerts surrounding the games are cancelled, press conferences moved online and safety is placed above all.

“I can’t buy this kind of coverage,” Greater Miami Convention & Visitors Bureau President and CEO William Talbert III said. “The priceless beauty shots of Ocean Drive and downtown and the Everglades will show the world they can ‘come on down.”

Even with many in-person events being cancelled and team stays shortened, Mr. Poms said, each game will probably have an eight-figure price tag, which is funded in part by various visitors organizations, municipalities, corporate sponsors and convention and visitors bureaus. For the National Championship, he said, an original fundraising goal was $20 million.

But with live events called off and a reduced-capacity stadium potentially promising fewer heads in hotel beds, some funding cities and organizations are still evaluating how much to shell out for the big games.

At a November meeting of the Miami Beach commission, officials discussed the city’s National Championship sponsorship package, which had been agreed to before the pandemic and included a cash grant of $400,000. While other requests, such as convention center fee waivers, were withdrawn by the host committee, the cash grant was still requested.

Commissioners asked staff why this amount wasn’t negotiated after Covid hit, especially as a key ESPN broadcast from Lummus Park was recently moved to Hard Rock due to crowding concerns.

City Manager Jimmy Morales noted that the city’s out-of-pocket expenditure had come down around $250,000 due to other parts of the package being removed, and commissioners accepted the deal but asked Mr. Morales to work with ESPN to bring the television event back to the Beach.

Though other South Florida counties and organizations may contribute, Mr. Poms told the commission, most sponsorship for the championship will come from within Miami-Dade.

Maintaining a good relationship with College Football Playoff, he continued, is essential in securing future games. The committee, he said, is still working out a multimillion dollar deal with Miami-Dade County and will negotiate with the City of Miami for a sponsorship grant of $250,000 to $500,000. Palm Beach County, he said, contributed $150,000, and Miami’s Downtown Development Authority and the Miami Beach Visitor and Convention Authority gave $150,000 and $90,000 respectively.

Mr. Morales noted that the game would be the first major event to take place in Miami since the pandemic began, and that it could boost the ailing tourism industry. The Fontainebleau Miami Beach will serve as the host hotel for teams, championship committee member Jack Seiler told Beach officials, the Ritz Carlton on South Beach will serve as College Football Playoff headquarters, and Loews Miami Beach will host ESPN. Broadcasts, he said, will report live from these venues and guarantee exposure.

“We expect Miami to shine starting Jan. 2,” Mr. Poms told Miami Today. The Championship, he said, is ESPN’s biggest property, and leading up to it shows such as College Gameday, SportsCenter and College Football Live will feature beauty shots of Miami-Dade beaches and attractions that remind the rest of the world that, despite the fact that it’s January, it’s warm and sunny in South Florida.

Jeff Rubin, who serves as president of the Orange Bowl Committee and a member of the championship committee, said capacity at Hard Rock is tentatively capped at 20%, or around 13,000 guests, but this number could change depending on the Covid situation in January.

The stadium, he noted, was the first in the NFL to earn Global Biorisk Advisory Council STAR approval, indicating adequate cleaning, disinfection and prevention protocols. All fans in the stadium, he said, will be required to wear masks, tailgating will be prohibited and a seating chart will ensure each group is six feet apart.

While the Super Bowl saw an explosion of events sponsored by everyone from the official host committee to Barstool Sports and Tampa Bay Buccaneers’ tight end Rob Gronkowski, Mr. Poms said neither host committee plans on having large-scale gatherings this time around.

Instead, he said, there will be high-quality virtual productions leading up to both games including a virtual coaches luncheon before the Orange Bowl and a three-part virtual Championship Kickoff series that will feature guests such as Clemson Football head coach Dabo Swinney and former University of Miami coach Jimmy Johnson.

Any events that are held in person, he said, will have strict safety and social distancing protocols.

“It’s been a challenging year for the country,” he said. “We view this as an incredible platform to showcase South Florida. There’s a spotlight coming to Miami.”