Advertisement
The Newspaper for the Future of Miami
Connect with us:
Front Page » Communities » Miami International Airport costly baggage system at 5% capacity now 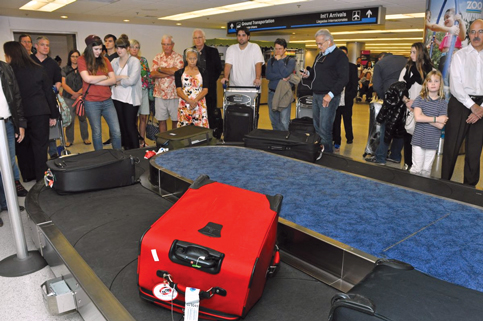 Four years after Miami-Dade lawmakers committed $185 million to overhaul Miami International Airport’s (MIA) baggage-handling system and two years since they agreed to add another $46 million to the project, it’s done – and on (revised) schedule.

But due to reduced passenger volumes, the system, while capable of handling 7,000 bags per hour, is now averaging that or slightly more each day.

“Because of the downturn in traffic due to the pandemic, the system is screening between 7,000 and 11,000 bags per day,” he said by email, adding that “30 airlines are now using the system.”

Work on the new system began around July 2016 after county commissioners voted 8-4 to hire Parsons-Odebrecht for the project.

An Odebrecht press note and county documents from the time said the baggage-handling project would “replace the in-line security screening portion of the South Terminal baggage-handling system and … install an automated sortation system for the Central Terminal [baggage-handling system], including outbound baggage conveyance systems, electronic modifications and power distribution systems, mechanical modifications, a 60,000-square-foot addition to the existing terminal building and a post-security corridor connecting Terminals G and H.”

Two years later, Parsons-Odebrecht had completed 36% of the project, but by then the contractor had hit several snags, a memo from Regulatory and Economic Resources Director Jack Osterholt said in July 2018.

That same month, commissioners voted to spend another $46.3 million on the project, raising its total cost by 25% to $230.8 million. The extra funds, Mr. Osterholt wrote, would allow previously deferred aspects of the project to be restored, including inbound conveyor lines, baggage inspection machines and sorting piers.

The Aviation Department had hired a third-party firm to assess the costs of hiring a second contractor to perform those improvements. Not counting additional scheduling and coordinating expenses caused by having two contractors operating concurrently in overlapping spaces, the firm determined it would cost $50 million, $4.3 million more than if the money went solely to Parsons-Odebrecht

Funds for the project were to come from a TSA Other Transaction Agreement ($101 million), Florida Department of Transportation grants ($13 million), and county airport bonds ($116.8 million).

Commissioners also approved an extension of the project’s completion date by 178 days, from March 12 to Sept. 6, 2020.

Parsons-Odebrecht is a long-time partnership between Virginia-based Parsons Corp., a frequent Miami-Dade consultant, and Odebrecht USA, the stateside subsidiary of Brazil-based Odebrecht SA.

In 2016, Odebrecht SA confessed to corruption and agreed to pay $3.5 billion in global fines to resolve what the US Justice Department at the time called the “largest foreign bribery case in history.”

Local projects on which the companies have collaborated include the Miami Metromover, an expansion of MIA’s South Terminal, and reconstruction of the North Terminal.