Advertisement
The Newspaper for the Future of Miami
Connect with us:
Front Page » Business & Finance » Bicycle sales were in high gear in pandemic – then supplies dried up

Written by Jolene Gonzalez and Denzel Vallecillo on December 1, 2020
Advertisement 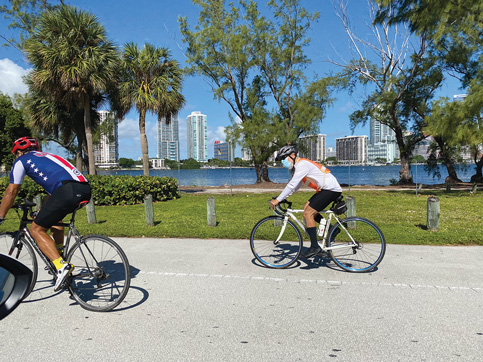 The Miami Beach Bicycle Center on Fifth Street is a South Beach institution. In 1977, Jack Ruiz established the business, which was later handed down to his sons, Alex and Danny. The shop has sold hundreds of bikes to young and old – tourists and locals.

But it has never seen anything like the coronavirus pandemic.

Soon after the coronavirus shutdown in March, buyers flooded into the store. Some were seeking specific types of bikes to fit their needs. Others, with old clunkers, brought them in for repair.

“The demand exceeded the supply, so we didn’t have enough bicycles to meet the demand out there,” says Alex Ruiz, who is 41 years old. “There wasn’t enough product coming in.”

Since the coronavirus hit, bike shops from Florida City to Aventura have been overrun. The road to Key Biscayne, where thousands of bikers pedal each weekend, looks more like an L.A. freeway than a peaceful trail. Several store owners continue to have a hard time keeping bikes in stock and expect this situation to continue, at least for a while.

At Oleta River State Park, 25-year-old Brazilian bicyclist Bruno Rosa took a gnarly looking road bike from his truck on a recent Saturday in the parking lot near a tangle of off-road trails in the woods nearby.

Mr. Rosa, who has been cycling at Oleta since he was 13, had two bikes with him. He noted that both roads and trails were packed with bicyclists. In some cases, rookies stop in the middle of the trail, creating a hazard.

His girlfriend was inside renting a bike. Mr. Rosa has been looking for a bike for her for months, but has been unable to find a small frame, he said. The stores are just out of stock.

“I have never seen as many people enjoying the outdoors as I have during the pandemic,” he said.

The lack of new bicycles coming from factories in China has strained Hialeah Schwinn Cycle in East Hialeah. With the Christmas season starting, 74-year-old Romanian owner Leon Rozenblum is concerned.

“Nobody knows when bikes will be in,” he laughed nervously. “Production has been shut down for more than a year.”

Mr. Rozenblum said he hopes to obtain merchandise by the end of 2020 but understands there may be complications.

“Everything comes from China today, everything,” he said. “Even a toothpick is made in China. Nothing is made here, that’s the whole problem.”

Asia’s lockdown and the backlog it created has had a particularly strong effect, because about 99% of bicycles sold in the US are imported from China and Taiwan, according to Statista.

The Miami Bike Shop on Biscayne Boulevard is among the most handy for the thousands of young people who have moved to Midtown and the Omni in recent years. The store even repairs bicycles for the Miami police.

Rudy Marquez, 32, owns the shop. Before the pandemic, he was selling 100 bikes per month. That skyrocketed to 500 sales when the pandemic hit.

Now he is out of stock.

“Ninety-eight percent of [the bikes in the shop] are repairs,” Mr. Marquez says. “For the last three months, we’ve been out of product. So, it has been repairs that have been the backbone of the business.”

The Miami Bike Shop is expecting a large shipment of bicycles within the next few weeks, but inventory won’t match pre-Covid-19 levels.

Mr. Marquez is uncertain about what the future holds for his shop. “I do assume we will get busy again, for sure,” he says. “But it’s hard to gauge.”

Alex Ruiz of the Miami Beach Bicycle Center is more optimistic: “I would say if 20% of [the new bicyclists] continue biking, then our business and our industry will be in really good shape going forward.”