Advertisement
The Newspaper for the Future of Miami
Connect with us:
Front Page » Top Stories » Auto sales wheeling ahead, at times surpassing 2019

Written by Angela Abdala and Gabriela Enamorado on December 1, 2020
Advertisement 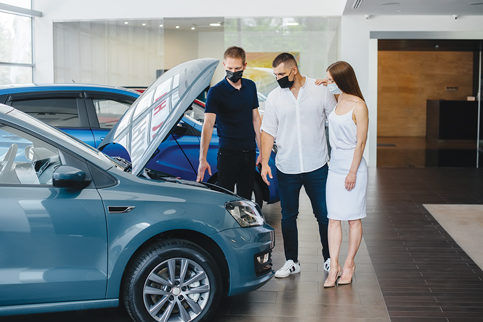 Back in July, when the virus was still new to all of us, Alyssa Thompson’s car broke down and the 21-year-old veterinarian technician was forced to rely on Carvana, an online car dealership, to buy a 2016 Ford Fiesta ST.

“It did take me a lot longer because dealerships were closed,” she says. “This was when everything was shut down, and everybody went into quarantine. So it was more so online, making phone calls, setting up appointments, as opposed to just driving around to dealerships.”

Almost from the moment Covid-19 was declared a pandemic, both automobile production and sales began to drop. Dealerships had to change the way they sold cars, relying on online sales and virtual showings instead of face-to-face negotiation. Most everything had to be done over the phone, by appointment or online. Because of this, sales fell, then fluctuated, but recently they seem to be steadily rising.

Car sales nationally have been improving recently. During the third quarter of this year they were down 10% from 2019. In any other year such a drop would be terrible for car dealerships, but it’s an improvement from the second quarter, when the decrease was 34.1%. Lately, they have even exceeded 2019 sales some weeks, according to the Wall Street Journal.

In South Florida, the numbers reflect those nationwide totals. According to the Florida Automobile Dealers Association, business in the industry dropped up to 50% across the state’s more than 850 dealerships back in May. Most of the business came from lease terminations and collision replacements.

Online car shopping has helped sustain car dealerships throughout the pandemic. Many also had to rely on delivering cars to customers.

“We have offered at-home delivery,” said Anthony Abreu, a car salesman at Ride4U, a chain dealership with locations throughout South Florida. “That’s one of the things we do, as well as by appointment. We don’t like to take walk-ins.”

Car dealerships also have been making sure to keep their spaces clean and sanitized for customers who come in-person.

“We usually just ask walk-ins some questions about where they’ve been, where they work at, if they’re at high risk, if they’ve been in contact with anyone, as well as advertising the fact that we sanitize our dealership every single week for coronavirus,” Mr. Abreu said.

Another issue Florida dealers have had to face is a shortage of new cars. Many auto factories were shut down for weeks, causing production to fall behind demand.

“There’s a serious, serious shortage of cars,” says Michael Blanchette, the general manager of Auto Sensation in Fort Lauderdale. “There [are] no cars being sold, so there are no trade-ins. So cars with 15,000 miles or less  are going anywhere from $2,000 to $3,000 more in book value… Every dealer in the state of Florida that I know of is having a real problem getting inventory.”

Car dealerships have been resilient throughout the pandemic. They’ve had to figure out how to stay in business in the midst of chaos. But despite the hardships, things are looking up for the automobile industry.

As Ted Smith, head of the Florida Automobile Dealers Association, recently told WPTV in West Palm Beach. “I think that we’re going to be OK if Floridians realize the economy is improving – people are able to go back to work.”