Advertisement
The Newspaper for the Future of Miami
Connect with us:
Front Page » Arts & Culture » Moviegoers see theater safety precautions in brighter light 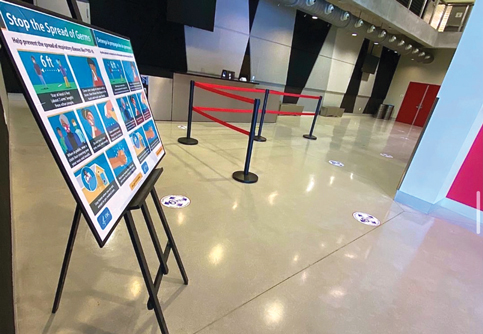 Local film theaters are seeing a steady flow of moviegoers coming back to in-person cinema as promised safety measures ease their comfort levels.

Loyal patrons are putting in efforts to support the film and arts community, all while theaters concentrate on offering a hybrid of socially distanced showtimes and continued virtual film and live experiences.

“It has been a steady return because people first need to decide if it’s right for them to come out and watch a movie,” said Jaie Laplante, Miami Dade College’s Tower Theater Miami executive director. “The big change is that we are not getting the big Hollywood movies that are holding back and seeing what happens. Since there are fewer of those films, we must get more creative with programming films that people will have the urge to come out for.”

Like most theaters, Mr. Laplante said the Tower Theater, at 1508 SW Eighth St., is operating at 50% capacity and has not really filled up its auditoriums, “which might be a good thing for people to feel comfortable and put more space in between.”

Mr. Laplante said the theater has just started to look into allowing patrons to rent out a showtime slot.

“I know all of the arts are doing it to some degree. If people want to rent out one of our regular programming because it makes them feel safer, then we will make it available,” he said.

“We really want to focus on enriching the lives of our audiences by still showing films here at the venue and offering the same films virtually,” he said.

More exciting and refreshing news is on the horizon with the upcoming outdoor series called Movies Under the Gables Moonlight. The next screening will be held on Dec, 19 at William H. Kerdyk, Jr. and Family Park at 6611 Yumuri St. featuring The Santa Clause. The series will alternate between William H. Kerdyk Jr. and Philips Park at 90 Menores Ave. every month through April 2021. The Miami International Children’s Film Festival will be an entirely virtual event starting on Dec. 28., Mr. Chavez said.

“We are working with the city and have curated a selection of very fun and engaging films for all ages,” he said. “We need to pivot in light of these circumstances.”

“We are filming performing art forms, editing them into a package and showcasing it on the big screen hoping to help our patrons ease their way back into enjoying and supporting public venues such as ours,” he said.

When it comes to rentals in general, they are coming back up again, Mr. Fields said. “We are working with community organizations that are showcasing live events like a spoken word rap battle or play readings, where they offer a hybrid of live streaming along with a limited live audience.”

The silver lining for a nonprofit organization like Fantasy Theatre Factory, at 6103 NW Seventh Ave., is always relying on grants and donation support, he added. “Our rentals had hit us the hardest and other forms of revenue sources like festivals and tour shows within Florida, but we were able to receive the first batch of federal relief funds and we are very fortunate to get that.”

It is going to take a couple of years to get back to the way it was pre-Covid, but slowly things are getting better and it is very encouraging, Mr. Fields said. “As of right now, we are scheduled to offer programming for Zoo Lights Miami with outdoor events.”