Miami Beach has joined the gold rush to sell naming rights. Sadly, most who join the hunt end up poorer.

A committee is following a gold map from a consultant who says the city could get $1 million a year for the name on the Miami Beach Convention Center, North Beach Bandshell also could get a name buyer, and more gold might be out there. The committee is to advance the concept in December.

We’re certain money will come from this: the city will pay consultant Spectra Partnerships. But any revenue for the city is far trickier.

Spectra told the city that naming rights for 11 to 12 North American convention centers are on the market. Why has nobody snatched them up – and how much harder will a deal be to cut in the era of Covid-19, when conventions are few? Why put your name on a little-used building?

But the convention center should rebound once the coronavirus is controlled, so naming rights will be easy to sell then, right?

For example, in 2008 Miami commissioners faced exactly the situation Miami Beach does today: they were battling a tight budget and needed funds. So commissioners unanimously supported selling naming rights to city park buildings. The parks director was to reach out to initiate the sponsorships.

“Whatever you do, on the first negotiated name, don’t sell yourself short,” Commissioner Joe Sanchez cautioned Parks Director Ernest Burkeen. 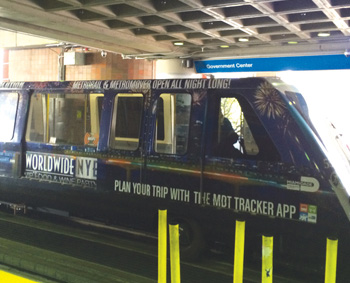 County got no takers offering naming rights at Government Center station for $37,000.

Mr. Burkeen didn’t sell himself short, and neither did his successors: to date, the city is still awaiting the first dollar of that very easy money. Even if you understand marketing, you’ve got to find someone who wants the name and can make money with it. Miami didn’t find any.

Neither did Miami-Dade Transit, which in 2009 planned to sell Metromover station names. It based very reasonable charges on the visibility of each station. The top was $48,000 a year for the Bayfront Park stop, followed by $42,500 for Omni, $37,000 for Government Center, $32,000 for Eighth Street in Brickell, and as low as $2,500 for Third Street Station.

“This is such a new approach that it’s hard to forecast what the ultimate income potential is,” said Michael DeCossio, transit marketing chief. “We will know once we get the first contract.”

He was wise not to promise too much.

Like Miami Beach, the transit department hired a consultant, Front Row Marketing Services. Front Row got $50,000 in the deal, which was the only gold anyone collected. The county is still awaiting that first contract: it couldn’t even sell naming rights to Third Street Station at $2,500.

The next big pot of gold for naming rights went not to government but a baseball team. When Miami-Dade gave the moon to Marlins owners, building a stadium for almost $3 billion so the Marlins wouldn’t flee to Las Vegas, it also gave the team all stadium naming revenue. At the time, stadium names around the US were yielding $7 million to $10 million, so Marlins owners got as huge windfall, right?

Yes, they got a windfall, but naming rights have yet to become part of it. As the team begins its 10th year in the county’s ballpark, it’s still Marlins Park and nobody has gotten a penny for naming rights – and you can’t blame the pandemic that kept the Marlins from selling a single ticket this year.

It’s not that naming rights can’t be sold here. Florida International University got Ocean Bank to sponsor a stadium. The Miami Dolphins have had stadium sponsors. The Adrienne Arsht Center and the Pérez Art Museum of Miami have names above the doors. It can be done.

But for every success story, there’ve been many miscues.

When some Florida International University trustees got angry with former President Mitch Maidique, whose name graces the West Dade campus, they tried two years ago to take the name back and sell it for a $100 million donation. Wisely, they didn’t – maybe because $100 million in naming rights is much harder to sell than to say.

When Cleveland-based Superlative Group got involved in naming rights with the county two years ago, it said the $2 million a year American Airlines was paying to put its name where the Miami Heat plays was chicken feed.

“The $2 million you get from naming rights are far less than what it’s worth,” Superlative’s Miles Gallagher told commissioners. “We think conservatively it’s worth at least $6 million, which is a $4 million increase.”

“This is the way to go,” said then-Mayor Carlos Giménez. “We think [this will bring in] anywhere from $25 million to $50 million for the county for a contractual right we hold.”

So far, it’s also a no-producer. The county and Superlative have found no sponsors in a search that began long before Covid-19.

So instead of the $2 million yearly that American paid, the county this year must pay Heat owners $2 million for the county’s unsold naming rights. That deal lasts nine more years: every year the county doesn’t sell the rights, it still must pay the Heat $2 million. But if the county ever does sell the name, Superlative will get 5%. Government doesn’t always get paid, but consultants do.

Still, hope springs eternal. When Commissioner Jose “Pepe” Diaz suggested in October 2018 that the county examine naming rights for all its buildings because “there’s a hunger for this type of advertising,” Mayor Giménez promised to look into it.

The problem is, it has to look as good to the rights buyer as it does to the seller, and when times are hard in government, they’re hard in business too. To cover naming rights, for example, American Airlines had to add enough plane tickets sales every year from a name on an arena to increase its sales margin by $2 million. It’s a cold, hard business decision.

When governments pin budgetary hopes on naming rights, they’ve usually flopped. It’s fine for Miami Beach to offer to sell the rights, just don’t budget any revenues before you sell them.

Don’t worry: if the city happens to get a pot of gold, you’ll find a way to spend it.