Advertisement
The Newspaper for the Future of Miami
Connect with us:
Front Page » Business & Finance » PortMiami cargo keeps head above water in downturn 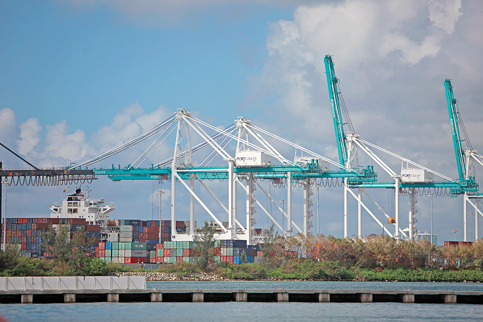 Sea cargo to and from Miami-Dade has dipped only slightly despite the coronavirus, according to PortMiami Director Juan Kuryla, who said he expects improvement through year’s end.

“Year over year and year-end fiscal 2020 … we were only 4.8% down,” he said. “That is a significant achievement considering the economic condition worldwide and considering some countries have not yet totally opened.”

Based on those figures and Mr. Kuryla’s estimate, PortMiami handled about 1,032,000 TEUs through Oct. 1.

“[That’s] not the final number,” she said by text.

About 49% of PortMiami’s cargo links with the Americas and Caribbean, with Asia comprising 33%. The remaining 18% links with Europe, the Middle East, Africa and India, whose cargo is counted separately.

When the pandemic struck in March, the port was doubly hit as cruise lines halted trips and trade partners globally slowed or hit pause.

Latin America continued to suffer through September, Mr. Kuryla said, with factories still shut in Honduras, Guatemala and El Salvador, which with the Dominican Republic are Miami-Dade’s top sea trade partners in both volume and value behind China.

“Those economies contracted significantly,” he said. “The consumption in those areas went away.”