Advertisement
The Newspaper for the Future of Miami
Connect with us:
Front Page » Government » Miami Marine Stadium, if restored, couldn’t welcome public 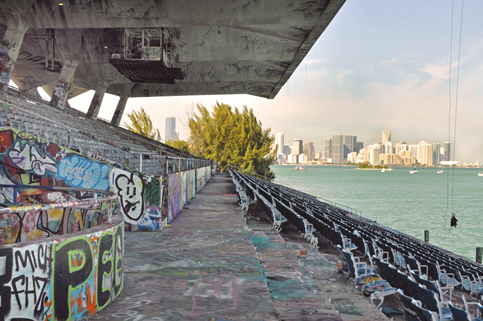 Imagine the City of Miami spending more than $40 million to restore the iconic Marine Stadium only to be prohibited from using it for “public assembly” because that special use permit expired long ago after the stadium was closed in 1992 in the wake of Hurricane Andrew.

That’s the reality facing city officials, who have been pushing for a zoning text amendment to once again allow the stadium to host large crowds.

City commissioners are scheduled to hold a second and final hearing today (11/19) on a zoning code amendment that would again allow public assemblies at Miami Marine Stadium on Virginia Key.

At their most recent meeting, Virginia Key Advisory Board members expressed concerns about the lack of approval for public assemblies, along with frustration that restoration of the waterfront stadium is taking so long, even in light of delays caused by the Covid-19 pandemic.

At the September meeting of the advisory board a city staff report noted the need for “solutions to zoning conflicts that could result in construction schedule delays if not resolved by the completion of the general contractor procurement process.”

David Snow, with the city’s Planning Department, addressed the matter then and was quizzed on the status at the board’s most recent meeting by member Lynn Lewis, who asked for an update on the proposed zoning amendment.

Mr. Snow said the amendment has been approved by the Planning, Zoning and Appeals Board and on first reading by the city commission.

If approved, the amendment would “allow non-conforming structures to continue their use so long as it is within the historical aspects of the structure,” said Mr. Snow.

Board Chair Joe Rasco asked Ms. Lewis if she is worried about the amendment.

Ms. Lewis said: “Well, I think it would be an awful shame to have spent as much money as we have spent so far, and as much as the taxpayers authorized in the referendum, and find out, ‘whoops, you can’t do that with the existing zoning.’ And I know the city would not allow such an ironic thing to happen, but it is not without concern.”

The city adopted the Miami 21 zoning code in 2010, and with the change the idled stadium property was classified as a park or CS (Civic Space Zone). Place of assembly, which is a defined use in Miami 21, is not a permitted use in Civic Space Zones.

Ms. Lewis asked if the zoning text amendment is a sure thing and will allow the stadium to be a place of assembly.

Yes, answered Mr. Snow, if approved the amendment “would ensure that that use would be permitted at that location.”

One board member asked for clarity, to make sure the amendment “doesn’t open any other doors to anything else.”

Mr. Snow responded: “That’s correct. It is very specific to restoration of existing facilities, such as Marine Stadium. So, it would not open up other doors for other types of uses or those kinds of things that didn’t exist in (Civic Space Zones) before.”

The city owns most of Virginia Key, including the concrete stadium and the basin.

The city has more than a dozen major projects in the works for the island, and the advisory board was created to help facilitate those projects.

The Civitas company has been hired to help design a multi-million-dollar improvement plan for the so-called Flex Park surrounding the stadium.

At the recent meeting, board members expressed frustration with delays in the restoration and the Flex Park improvements.

“Not much has changed since the board saw the Civitas design last time” earlier this year, said Mr. Snow. “Since Covid hit, we have not had the time to brief the (city) manager on the project itself. Obviously, the manager has been consumed with a lot of other things going on with the city at the time. So, we’re queuing up an opportunity to speak with the manager on the Civitas design.”

He added, “Once we have that opportunity, we’ll be able to go and start work with Heisenbottle Architects on a governing strategy for the Flex Park … and we’ll come back to the board to report on how we’re proceeding with the design.”

In January 2017, the city hired R.J. Heisenbottle Architects for architectural and engineering services related to the stadium.

The advisory board has met only a few times this year, instead of monthly.

“I know the agendas have been very, very light,” said Chairman Rasco. “And I’m just as frustrated as you are, but these things are way beyond our pay grade right now. The whole Covid thing, as all of you are intimately aware, has really caused a complete dysfunction of what was going on before and we wish that we could bring more substantive things to the board and get back to where we were in February.

“I can tell you, (based on) my discussions with some of the staff, they are equally frustrated that things aren’t moving forward,” Mr. Rasco said. “We just ask for a little more patience and hopefully we can move forward on all these things that we’re all anxiously wanting to see, and to provide input on.”