Advertisement
The Newspaper for the Future of Miami
Connect with us:
Front Page » Top Stories » Miami Beach hunts for venue sponsorship revenue 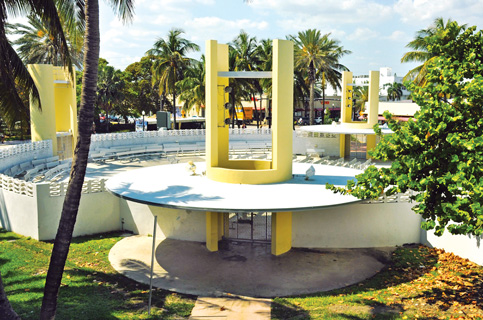 Miami Beach commissioners, who seek to reduce the city’s dependence on tourism as that sector continues to falter, explored on Friday the first category of opportunities for economic expansion laid out by city administration: sponsorship opportunities and naming rights.

At a meeting of the Finance and Economic Resiliency Committee last month, commissioners initiated a discussion of how the city can diversify income. The item featured a broad overview of categories staff could focus on, including business recruitment, increasing reserves and identifying new revenue streams.

At Friday’s committee meeting, commissioners addressed the urgency of diversification. “We are going to have a dark winter,” said Ricky Arriola. “2021 does not look good with respect to tourism for anyone in this country. What can we proactively do to increase revenues that doesn’t involve raising taxes?”

Representatives of Spectra Partnerships presented an overview of opportunities for expanding revenue by selling sponsorships and naming rights. In July, the city contracted with the company for consulting in this area. Top priorities, said Senior Vice President Bryan Furey, include naming rights for the newly renovated Miami Beach Convention Center and North Beach Bandshell.

According to Mr. Furey, naming rights for the convention center are worth roughly $1 million per year for a 10-year minimum lease. For comparison, he said, American Airlines’ former naming rights to the Miami Heat arena were worth about $2 million per year. But, he said, sponsorship of sporting venues yields more than convention centers because of the prime time media coverage professional sporting events get.

Beyond these big-ticket items, he identified other sponsorship opportunities and strategies for getting them in front of interested brands. At the moment, he said, the city has so much to offer companies that it can be overwhelming for them to digest. Building on signature events and properties, he said, is key to drawing brands and helping them understand what they would gain from a partnership.

Examples of events and properties that could be sponsored, he said, include parades, parks and facilities, spring break events, artists markets and activations. One strategy the city could explore, he continued, is bundling opportunities with a similar “theme” for sponsors, such as a 4th of July celebration, Memorial Day event and Veterans Day parade.

Beyond these sponsorships, Mr. Furey said the city could consider exclusive or official partnerships with brands in various industries. For example, Miami Beach could have an “official rideshare partner” or “official athletic/beachwear brand.” For companies, he said, such official arrangements translate to a dollar value.

Commissioner Mark Samuelian said the public should remember that the purpose of this item is not to help brands but to help the city function. “We’re doing our best to provide the best service possible as a city,” he said, “and that takes that money.”

Commissioners asked staff to continue this item and bring a new “category” for expansion to the committee in December. City Chief Financial Officer John Woodruff said the next topic would be business recruitment strategies, and that in January he will update the commission on property management of city assets.

Jerry Libbin, president and CEO of the Miami Beach Chamber of Commerce, notified commissioners that the producers of the proposed North Sea South Beach Music Festival were still interested in working with the city for a 2022 event, and suggested Spectra link up with them. While this event was originally proposed for spring break 2021 and received support from the commission and chamber, planning was stalled due to covid concerns and the possibility of conflicting re-scheduled concerts handled by parent company Live Nation.

Mr. Libbin said he spoke with producers two weeks ago to confirm interest and that, as spring break is an event Spectra suggested pursuing sponsorships for, it would make sense to get the two camps in contact. Commissioners suggested a discussion should be initiated.

One Response to Miami Beach hunts for venue sponsorship revenue