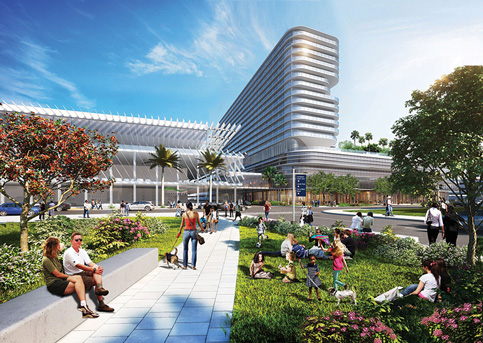 Development of a Miami Beach Convention Center Hotel has been delayed for an unknown period, but developer David Martin of MB Mixed Use Investment LLC said in a statement he is still confident in the project.

On March 16, Miami Beach spokesperson Melissa Berthier told Miami Today this week, the developer notified the city that it was experiencing “adverse delays” due to Covid, in keeping with the notification requirements of its contract. Since events including a pandemic would qualify the developer for an extension, she said, one was granted for a still-unknown period. According to a spokesperson for developers, a new timeline has not yet been announced.

“Our team is fully committed developing the Miami Beach Convention Center Hotel,” Mr. Martin said in a statement. “Since announcing a management agreement with Hyatt, one of the world’s premier hospitality operators, earlier this year, we have been working to finalize construction and engineering plans for the hotel.”

According to a February press release, the 800-room, 17-story hotel was set to open in 2023 before the pandemic struck. The new hotel, it said, was to be the second Grand Hyatt in Florida, and was to connect guests to the recently-renovated convention center via a skybridge.