Advertisement
The Newspaper for the Future of Miami
Connect with us:
Front Page » Transportation » Brightline pact has a Wynwood station on track

Brightline pact has a Wynwood station on track 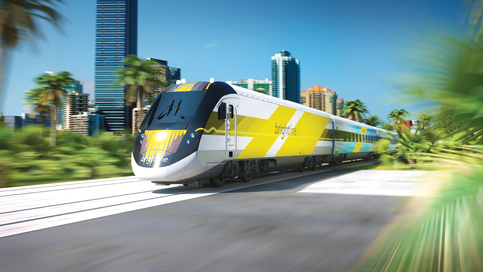 A binding deal between Miami-Dade and Brightline for a Miami-to-Aventura commuter rail line isn’t signed, but details of the project – including plans for a station in Wynwood – are coming into focus.

Sally Heyman, whose district much of the route traverses, called the item “the last piece of the puzzle in establishing the foundation necessary” for a future agreement between the county and company.

Brightline President Patrick Goddard said the project “couldn’t come at a better time for this community.”

The project’s total cost, who will run the service, the number of stations and where they’ll go are among specifics that “remain to be determined” by the negotiations, Deputy Mayor Jennifer Moon said last week.

But a stop in Wynwood is a no-brainer for what’s commonly called the Northeast Corridor of the county Smart Plan, said Albert Garcia, chairman of the Wynwood Business Improvement District (BID).

“We are now the most rapidly growing area in Miami-Dade, and by 2040 this Wynwood-Edgewater-Midtown area will have the largest population in the county,” he said. “The Smart Plan was planned years in advance using very traditional forecasting tools. We’ve blown those models completely out of the water.”

Much of the estimated $2 million it would cost to build the station would come from private dollars collected through the Wynwood BID, comprised of some 200 property owners whose tax-assessed contributions generate about $1 million yearly for 50 neighborhood blocks.

Parameters commissioners set for a future agreement include a one-time $50 million payment to Brightline and $12 million in annual payments for the first 30 years of a potential 90-year contract.

The up-front $50 million payment is “something [the Florida Department of Transportation] could support,” Ms. Moon said. Miami-Dade’s planned funding for the project would require approval by the Citizens’ Independent Transportation Trust, which oversees revenue generated by the county-wide half-penny surtax, Ms. Heyman said.

Miami-Dade last year agreed to pay $76.7 million for a station near Aventura Mall. Construction on the 17,500-square-foot station began Sept. 3 and is expected to finish by fall 2021. Brightline’s MiamiCentral Station downtown will anchor its other end.

As recently as October, Miami-Dade commissioners contemplated a plan for the corridor that included just three stops in between – the Design District, El Portal and North Miami.

Stations in Wynwood – at Northeast 27th Street between North Miami Avenue and Northeast Second Avenue – and by Florida International University’s Biscayne Bay Campus in North Miami were both part of a Brightline proposal in June.

The county’s omission of them, Mr. Garcia said, “wasn’t nefarious or intentional” but rather because local transportation planners “lost sight of the rapid, remarkable growth” of the neighborhood and the areas around it.

Plainly put, they were basing plans on outdated figures. With the results of the new census far off, the BID commissioned a study to support its argument and helped form a coalition of supporters, including FIU and Miami Dade College, to argue for the station.

“The Smart Plan was planned years in advance [using] very traditional forecasting tools, and there was a disconnect between what was being considered on the 25th floor of the Stephen Clark Government Center and what was actually happening just a few miles away on the ground,” Mr. Garcia said. “When the 2020 Census data comes out, it’s going to be an eye-opener. We just were able to get a preview by commissioning third-party studies and present them to the county and the Federal Transit Administration. When they saw those numbers, they were like, ‘Oh my God, congratulations and we can’t believe we almost missed this.’”

In a press note published after Miami-Dade commissioners voted, Brightline Senior Vice President of Corporate Affairs Benn Porritt wrote that the county and company will start negotiating “over the next 60 days,” and expect “a decision on who will operate the system in the coming months.”

The resolution by Ms. Heyman, which passed unanimously, calls for a status report from Ms. Levine Cava’s office within 120 days and one every 90 days after until every agreement the item calls for is submitted to commissioners for approval.

■Finish negotiating access agreements that will, at minimum, detail frequency of service, number of cars per train or total cars per day to be operated, fare structure inclusive of a fare transfer agreement and payments to Brightline of up to $50 million, paid in one or more installments, and $12 million yearly for “an agreed upon term for access to the Florida East Coast Rail Corridor…”

■Get all agreements needed for shared use of the rail tracks.

■Negotiate agreement for the operations and maintenance of the commuter rail service, including all costs of facilities, infrastructure and vehicles.

■Decide the number of stations and where they’ll go and get all necessary OKs from any other governmental, regulatory, private or public entities.

■Finish all other necessary approval processes.

While the Smart Plan has only existed since 2016, plans for a rapid transit upgrade between Miami and Aventura have “been on the books for 30 years,” said Jose Gonzalez, executive vice president of Brightline parent company Florida East Coast Industries.

“We sit in gridlock, and Brightline’s push through the [Northeast] Corridor will help alleviate that,” he said.

Property owner Bill Rammos agreed. “We are anxious to get started,” he said, “and create a great place in Wynwood/Edgewater.”

One Response to Brightline pact has a Wynwood station on track