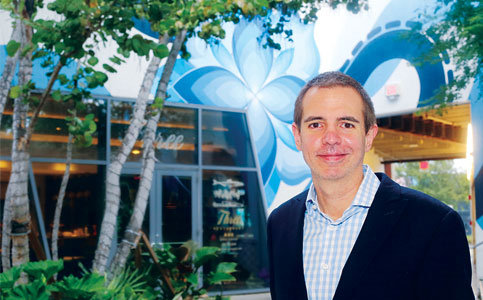 Albert Garcia considers himself an agent of change, a leader drawn to jobs and environments with steep challenges that offer equal or greater opportunities.

Such is the case with his chairmanship of the Wynwood Business Improvement District (BID), the funding mechanism and overlaying organization that over the past decade has helped to transform a long-unpolished Miami jewel into one of the nation’s hippest neighborhoods.

“It’s not just a hodgepodge collection of random retailers and restaurants,” he said. “There is a cohesive community here that we’ve helped to curate. People have a deep connection with the neighborhood.”

But two weeks after renewing his five-year contract with the company, his family called him back to help run the business as chief operating officer.

Five years ago, the family sold the shoe business but retained another, Wynwood Ventures, aptly named, he said, as all of its undertakings have centered on the neighborhood that, through his role as Wynwood BID chairman, he’s helped usher to unprecedented highs in investment – nearly $2 billion – and staggering yearly growth in pre-pandemic visits.

“2019 was record-breaking,” he said. “We welcomed close to 5.5 million visitors to Wynwood. The year before, it was closer to 4 million. Before that, 3 million.”

Wynwood’s continued success, he said, is in the hands of its many stakeholders that have united behind a common goal.

“This is not a one-center-of-gravity community. Unlike other neighborhoods that have one large developer, we have to constantly build consensus between over 200 property owners who all are very successful and have their own ethos of how to do things,” he said. “They’re competitive in their own world, not accustomed to playing together. We created the Wynwood BID to form that vessel, that platform, where everybody put their shields down, came together and invested in this common vision.”