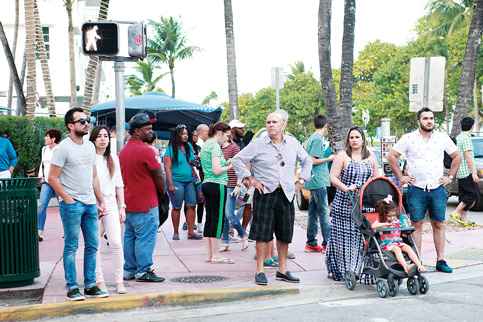 Updating Miami Beach’s newly-named Art Deco Cultural District has been the talk of the city commission all fall, but a major change isn’t likely overnight.

At a workshop Sept. 17, commissioners and city staff brainstormed ideas for re-imagining the Mixed-Use Entertainment District, which officials agreed hosted many good business operators but also battled problems such as hawking, quality of life offenses and a general “anything goes” atmosphere.

The workshop did not pass legislation but offered city staff in different fields the opportunity to present their ideas for revamping the area in regards to transportation, branding, police enforcement, tourism and culture, zoning and economic development.

Notable ideas presented included the permanent pedestrianization of Ocean Drive and new zoning rules that would roll back the closing time of bars and establish an alcohol review board.

These ideas met mixed reactions from commissioners, and the closing time recommendations were sent to the city commission with a negative recommendation from the Miami Beach Land Use and Sustainability Committee in October.

A proposed change to the area’s sound ordinance exemption, which would have rolled back the current exemption that allows businesses between Ninth and 11th streets to face their audio speakers toward the water, was also given a negative recommendation from the committee.

According to Mayor Dan Gelber, changes aren’t likely to occur in one fell swoop but will be a continuous process of pitching ideas and seeing what may work.

“A re-imagination” he told Miami Today, “isn’t going to happen with a single ordinance change –  it’s going to take a lot of different approaches to see what commissioners have an appetite for and what might work out.”

The area, he said, could “have it all” – family activation, business development and nightlife. But, he said, tightening enforcement against violators and “bad actors” would probably be part of the city’s focus during this process, as multiple commissioners have said they feel Miami Beach has “lost control” of the area.

Some proposed changes have already brought pushback. At the Sept. 17 workshop, city attorney Raul Aguila warned commissioners that attorneys representing Miami Beach institutions Clevelander, Palace, Mangos and Ocean’s Ten were prepared to sue if zoning changes occurred to affect these businesses’ “vested rights.” Representatives for these businesses also spoke out against the possible noise ordinance at the Land Use meeting.

Mayor Gelber said he understood why these businesses would be concerned, but he said “good actors” shouldn’t worry.

“I don’t think the Palace or the Clevelander should worry,” he told Miami Today. “I’ve been talking with city staff about options, and we don’t want to dislodge a business that’s been a good actor.”

One effort already making its way through the commission and staff is the possibility of year-round activation of Lummus Park. A resolution commissioners passed last month gave administrators the green light to construct a plan for activating the area, which could include considering sporting events, festivals or carnival rides.

Another effort Mr. Gelber said the city should focus on is re-branding the area to reflect Miami Beach’s preferred image. “County branding” focusing on “Greater Miami and the Beaches,” he said, is a little broad, and Miami Beach could look to supplement this with its own message.

Heather Shaw, Miami Beach’s assistant director of tourism and culture, told Miami Today that city officials are working to create a long-term strategy for cultural activation that will benefit the Art Deco Cultural District as well as the rest of the city. This plan is still in the research phase, she said, but if it is approved Miami Beach will shift its cultural planning from focusing on individual events to crafting a three- to five-year strategy for activations in the city.

This strategy, she said, would bolster the city’s image as an arts and culture capital by giving residents and tourists an idea of what they can expect, while also throwing a few “surprise” events into the mix.