Advertisement
The Newspaper for the Future of Miami
Connect with us:
Front Page » Business & Finance » Employers double down in looking after workers

Employers double down in looking after workers 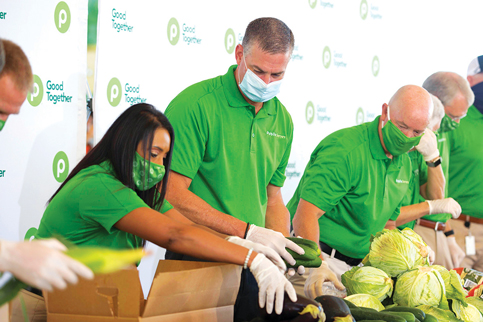 Being an employer during normal times isn’t easy. It involves many moving pieces, the most important of which, naturally, is the workforce that keeps business going. Amid a pandemic that killed millions, shook the worldwide economy and forced business closures and new safety precautions, it can be argued that the role has never been more challenging.

But where some job creators languished, others saw the problems Covid-19 created as an opportunity to double down in looking after their workforces.

One such company is Joe’s Stone Crab on Miami Beach, said Miami-Dade Commissioner Sally Heyman, who nominated owner Steven Sawitz for the category of “Caring Employers: Employers who took care of their teams and kept their businesses rolling despite economic and health challenges.”

Mr. Heyman said that after Joe’s shut down its restaurant in accordance with governmental orders, it kept every employee on its payroll and contributed to community efforts despite being closed during the usually lucrative claws season.

“When it was permissible to operate the Joe’s takeout, operating a ‘summer season menu,’ they routinely made donations to first responders,” she said. “In mid-October, the restaurant reopened for stone crab season with restaurant social distancing. Additionally, Steven and Jo Ann [Sawitz Bass, founder Joe Weiss’s granddaughter] have continued their annual practice of charitable lunch and dinners at Joe’s for private parties and have already hosted several during the first week [with] limited seating, take-outs and deliveries.”

Mr. Sawitz, who also served as a volunteer member of the county’s Covid-19 Economic Recovery Task Force, said that while Joe’s closed its main restaurant March 17 to adhere to statewide pandemic-driven mandates, the family-owned business committed to keeping employees on its payroll for two full weeks.

In week three, as closures continued, Joe’s set up a loan program to help employees. Shortly thereafter, a vital provision of the federal Cares Act, the Paycheck Protection Program, kicked in, enabling the company to allocate aid to employees and keep them above water.

“Thank God the government stepped up to the plate, as did Joe’s CFO Jeffrey Finkelstein and our bank, City National Bank, [working] around the clock to make sure employees were paid,” Mr. Sawitz told Miami Today. “And mom [Jo Ann] Ok’d everything. She was away from the restaurant, quarantined across the street.”

Mr. Sawitz said that while he is grateful for Ms. Heyman’s nomination, the spotlight belongs on Joe’s staff for their dedication, consideration and humanity.

“When I told them that we had to close the restaurant because the city was making us do it, a lot of people came up to ask how I was doing,” he said. “That speaks volumes about the people who work for Joe’s. I’m in a better position than many of them to withstand that [financial] hit, and they wanted to make sure I was OK. They have incredible character, broad shoulders and they’re the reason I love going to work.”

An employer that has long been there for its community and continues to do so today is employee-owned supermarket chain Publix, said Symeria Hudson, president and CEO of Chapman Partnership, the private sector partner of the Miami-Dade Homeless Trust.

Ms. Hudson said that Publix, a steadfast supporter of Chapman Partnership, deserves top honors in the category for how it supported and protected its employees during the pandemic, including providing paid leave to workers who test positive for the virus.

“They also adjusted store hours and protective measures to mitigate the need for enhanced cleaning and potential spread of the virus,” she said by email. “Beyond their employees, Publix has purchased large quantities of produce and milk from local farmers in order to supply food banks through Feeding America. This is in addition to the millions of dollars in grants and support from their community foundation.”

Maria Brous, director of communications for Publix, said by email that the grocery chain was “humbled by the nomination.”

Robyn Hankerson, community relations manager for Publix’s Miami division, invoked a maxim often used by founder George Jenkins: “We are not only in the grocery business; we’re in the people business.”

So far, Publix has donated more than 15 million pounds of produce to neighbors in need through its farmers and families initiative.

“Since opening our doors in 1930, Publix has been committed to treating our associates with dignity and respect and giving back to the communities we serve,” Ms. Hankerson wrote. “That spirit of putting our associates and communities first has never been more apparent than during the coronavirus pandemic. Throughout this difficult time, Publix has stayed true to our core values, and we are proud of the many ways we have been able to provide support.”

“Not only did they look to take care of their employees, they took care of everyone associated with them,” he said.

Baptist provided its employees with many forms of aid, including financial support through emergency standby pay when regular work wasn’t available due to canceled elective surgeries and procedures and a temporary redeployment program for staff employed in temporarily closed departments and centers.

The hospital system also brought in additional nurses, respiratory therapists and other staff from outside the organization to support its employees in meeting Covid-19 needs. And when some employees unfortunately transmitted the virus, Baptist delivered care kits to their homes.

On the community side, Baptist provided free Care On Demand telehealth urgent care services to Miami-Dade residents and gave out free flu shots at its urgent care locations. That effort continues, said spokesperson Georgi Pipkin, who said Baptist Chief Human Resources Officer Adriene McCoy deserves much of the credit for Baptist’s status as a top employer.

“Taking care of our community and people is at the heart of what we do,” said Jessi Berrin, director of development for the Baptist Health South Florida Foundation. “Compassionate care by and for people is the cornerstone of our culture, [and] it’s really our people and our culture that deserves to shine.”

Past “Best of Miami” honoree Kathryn Mikesell, co-founder and director of the Fountainhead Residency and Studios, said the Institute of Contemporary Art, located in the Miami Design District, is worthy of mention as well.

“They kept their entire staff intact, launched new education programs and were very quick to offer unique online content,” she said by email. “They were also one of the first art museums to open when given the okay to do so.”

One Response to Employers double down in looking after workers