Advertisement
The Newspaper for the Future of Miami
Connect with us:
Front Page » Top Stories » Creative minds use ingenuity to map road to economic recovery

Creative minds use ingenuity to map road to economic recovery 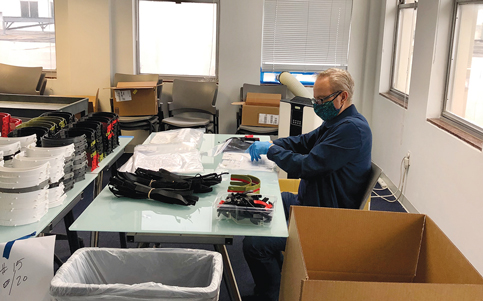 As Miami-Dade continues to battle the novel coronavirus under “new normal” conditions, its path to recovery and prosperity relies in large part on creative minds whose ingenuity will pave the way.

Thanks to the inventiveness of John Stuart, director of FIU’s Miami Beach Urban Studio, home to one of the largest 3D printing labs in the state, thousands of lives may have already been saved.

When the pandemic struck, Mr. Stuart quickly retooled the lab to make face shields for essential workers. As of this month, he and his collaborators have produced nearly 11,000.

It’s for that reason that both Tim Schmand, executive director of the Lincoln Road Business Improvement District, and Lourdes Boue, CEO of West Kendall Baptist Hospital, nominated him for the category of “Innovators: Those in the community who innovated in their own ways to make sure abnormal times seem more normal and functional in a pandemic.”

Mr. Schmand said, “I’d see him when coming in to work. He’d be in a suit, coming down out of an elevator with boxes of [personal protective equipment] to load into a truck. He was really hands-on, smart as a whip, and I’ve always admired him. I thought, ‘John, you are the man.’”

On the week of March 13, ahead of locally mandated closures, Mr. Stuart and his staff were sent home. He asked some staff members to take 3D printers home with them in case there was a need.

The precaution proved prescient. By that weekend, Mr. Stuart said, Dean Brian Shriner and FIU President Mark Rosenberg contacted him to ask if he and his staff could 3D print supplies like ventilators, stethoscopes and face shields.

“By Monday the 23rd, we went back into the lab as emergency workers,” he said. “We were the only ones allowed on the streets of Miami Beach that weren’t doctors, nurses or other things like that. The city manager gave us permission.”

Using a modified open-source design, the lab soon had 60 printers running and welcomed collaborators from the FIU College of Engineering and Computing, FIU Embrace and any other groups that could help. On April 6, the lab sent out its first batch of 1,000 face shields.

The face shields have gone to front-line health care workers at Baptist Health System, Miami-Dade firefighters, City of Miami firefighters, and workers across the state who care for adults with special needs.

FIU held onto some masks for its athletics department and for students and professors in its medical, communications, architecture and arts programs.

“It was a big effort to collaborate, pull the team together and get these products out to people with instruction manuals in the bags,” he said. “I just had an amazing team. The only way I could possibly do it was with the people here and around the university.”

The group’s Better Bus Project, the first nonprofit-led revamp of a major US bus system, had been in the works for roughly two years, funded by the county and other public and private investors.

But in late August, rather than deliver the plan to a county whose transit system was shaken by the pandemic, the group retooled the insights it gathered for a temporary resiliency plan to help riders amid social distancing and safety-related changes.

Through online campaigns and content, the group also fought to maintain service standards and spread awareness of inequity on the strained transit system.

“Azhar’s leadership of Transit Alliance Miami has brought data-driven thinking to mobility advocates in Miami-Dade County,” Mr. Schmand said. “He stepped into the breach during the coronavirus to advocate for public transportation issues affected by the pandemic.”

Mr. Chougle said he is proud of his team and its collaboration with the county on the Better Bus Project.

“[It is] the most significant improvement we can make to our transit system today,” he said. “We are out to break Miami’s longstanding history of putting politics ahead of practicality when it comes to transportation, and we are just getting started.”

Another innovator who used his imagination in a positive way is Christopher Simmonds, principal of Care Elementary School, said Matthew Anderson of Bank of Merrill Lynch at Broucek & Gutierrez Financial Advisors.

Mr. Simmonds made headlines last month for a rap video he created to help students adapt to a new school year with coronavirus-specific restrictions. The video, “Teach Me Social Distance,” is a reimaging of hip hop group Cali Swag District’s “Teach Me How to Dougie” and includes lyrics like, “Stay six feet. Yeah, it’s easy-peasy. And put your mask on when you’re in the building. Wash hands, sanitize – 20 seconds a sitting.”

Mr. Anderson said the video’s publicity, while noteworthy in the current Covid-19 context, shouldn’t eclipse the fantastic work Mr. Simmonds and Care Elementary faculty do at the private Christian school, whose attendance is funded in part through the Florida Tax Credit Scholarship program.

“He is the epitome of using education to bridge the gap to kids who need it to be successful in life,” Mr. Anderson said. “He has a history of connecting and inspiring kids that I’ve yet to see elsewhere, and it all takes place in a special little school in Overtown that many of us walk by with no idea of the magic that’s occurring there.”

Central to Care Elementary’s mission is breaking the cycle that keeps underserved communities disadvantaged, Mr. Simmonds said. The path to success is rife with obstacles, but a great education – especially one that begins at an early age – makes those hurdles surmountable and can be a catalyst for broader improvements throughout communities.

“Care gives all students the gift of reading, fluency and ends generational poverty one student at a time,” Mr. Simmonds said. “I’m living my dream, honestly. I’m not just a principal. We’re a beacon of hope for the community, and my community leadership doesn’t stop at this school. It spreads through our students and parents.”