Advertisement
The Newspaper for the Future of Miami
Connect with us:
Front Page » Opinion » We are ignoring our miracle weapon to battle Covid-19

We are ignoring our miracle weapon to battle Covid-19

In a rapidly intensifying pandemic, imagine the welcome safety net if each of us could carry a pocket device that would alert us if anyone nearby had recently tested positive for Covid-19. While it wouldn’t be a vaccine or cure, such a system could tamp down the disease’s spread.

That great advance – which wouldn’t cost us even a penny – would make it far more likely that whoever had this miracle device would know when they needed to test for the coronavirus.

Who wouldn’t want this personal protection, which would be far less intrusive than the masks we all wear? We’d all be rushing to get it, right?

It turns out that we all have this miracle device at our fingertips. It’s called a cell phone, and just by downloading a free app we could all have this layer of protection today. But we don’t.

In mid-September, with very little fanfare. Miami-Dade County released a contact-tracing app called CombatCovid MDC that will alert anyone near a person who had registered as testing positive for the virus in the past two weeks. If you have the app, you get the alerts. It’s that simple.

The discouraging thing is that in six weeks only 8,500 of us in Miami-Dade downloaded the free app, Miami Today reported last week. That’s about three-tenths of one percent of those age 10 and older, the age range of people who are likely to have cell phones. With so few of us participating, the app offers absolutely minimal contact tracing ability. 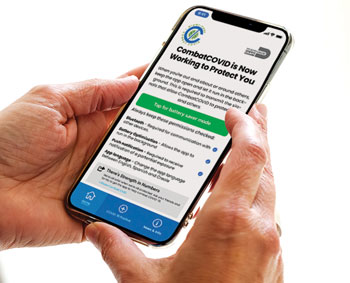 The more of us who both sign up and honestly report if we have tested positive, the better protection this app offers to us and to society. While full participation is impossible, experts say contact tracing can be highly effective if 60% of us get voluntarily involved.

The app has a lot of parallels to wearing a mask and social distancing. The more of us who do it, the more effective the process is in cutting down the spread of the virus,

But the app has one thing nothing else does: while the mask is primarily to protect those other than the wearer, the app can warn us when danger of the virus lurks around us. The more of us who honestly participate, the more efficient the warning system for those of us who use it.

Imagine if this miracle device – the cell phone with an app – had been both available and then used by everyone at the White House a few months back.

The app is a piece of cake to get. It’s free at both the Apple App Store and Google Play – after the county invested $775,000 to license the program for us. Downloading and activating it took me less than five minutes, minimal time and effort invested to slow this fast-spreading disease.

So why haven’t we all done it? It’s certainly not the cost in either money or time.

Is it that few of us care about the disease? Hardly.

Is it that we don’t believe there really is a disease? As we’ve detailed, there are some people in Miami and elsewhere who say it’s all a hoax. They probably also believe that the Earth is flat and the Moon is made of green cheese, but some do exist – for mankind’s sake, hopefully very few.

My money is wagered that neither of the above groups is the big problem in adopting a sophisticated contact tracing system we all have at hand. After a Google search for CombatCovid MDC, my guess is that the vast majority of county residents have not the slightest idea that this contact tracing app even exists.

The county unveiled it in mid-September and at least three television stations noted it at the time. But other than some mentions on social media and two Miami Today articles, few seem to have mentioned it since. The app is not used simply because it’s so unobtrusive that it’s almost invisible.

We know that new county Mayor (fill in the blank, dear reader, once the votes are counted) will see the impact of Covid-19 as one of her/his most immediate and pressing challenges. One very easy step to combat the virus is for the mayor to pull out all the stops in letting the public know that we have a contact tracing system waiting to be put to use (even if it was developed under predecessor Carlos Giménez).

The new mayor should put the county’s public relations and advertising teams into high-gear action, while reaching out to every business and civic group to help spread the word. Miami-Dade has invested more than three-quarters of a million dollars in sophisticated contact tracing. Now it needs to invest even more to get everyone involved and using it to make it work.

That investment could be quickly recouped, because beating the virus would be the county’s biggest single economic stimulus. The economy won’t rebound without citizens being comfortable physically and mentally in doing business every day.

Already 250 people who tested positive for the virus in the past 14 days are voluntarily using this app to notify us of their presence without having to reveal their identities. The more people who use the app, the more who will issue warnings.

Imagine the added reassurance if each of us actually did use this free app that would alert us if anyone nearby had recently tested positive. The more of us who join in, the better the community will be protected. The only way to make it effective is to spread use of the app faster than the spread of the virus.