Advertisement
The Newspaper for the Future of Miami
Connect with us:
Front Page » Arts & Culture » Two weeks without Art Basel: what’s to replace it?

Two weeks without Art Basel: what’s to replace it? 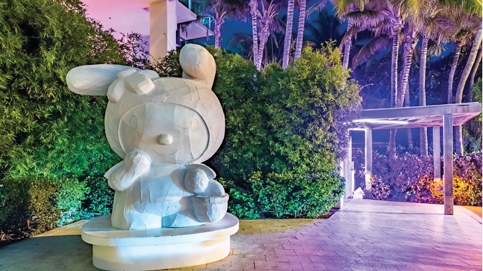 There may not be an in-person Art Basel this year, but Miami Beach officials are planning for an eventful and socially distanced art week and holiday season.

Art Week Miami Beach, said Heather Shaw, the city’s assistant director of tourism and cultural, will feature a mix of live and virtual events and a number of presentations by “cultural anchors” such as the Bass museum. Festivities, she said, will run primarily from Nov. 30 to Dec. 12, with some exhibits running longer.

“We’ll have a robust collection of art and cultural activations for our residents and the public to enjoy,” she said.

“No Vacancy” is one program the city has drawn up to produce an innovative artistic experience for guests. This program, Ms. Shaw said, pairs 10 artists with 10 local hotels and grants to each artist $10,000 to create a work that fits into the style of each hotel. The works will be voted on by a panel of expert judges as well as members of the public, with the winner the judges choose earning $20,000 and the artist voted on by the public winning $5,000.

Participating hotels such as Avalon, The Betsy and Lenox Miami Beach, Ms. Shaw said, were chosen in part for their proximity to each other, so that the entire exhibit would be walkable. The artists chosen were also a diverse group, she said, and they were matched with hotels that were deemed a good fit. Artists, she continued, had time to work with and view the hotels, and have been developing their displays for months.

The idea for the program, she said, is so popular that some hotels that are not participating brought in artists to create similar exhibits.

Another walkable Art Week option, Ms. Shaw said, is “Art Outside,” which is spearheaded by The Bass museum. This activation, Miami Today previously reported, is to be a connected route of Miami Beach’s public artwork which will feature new installations as well as existing outdoor art.

The route, Miami Today reported, will go from the Bass to the Miami Beach Convention Center before heading toward Lincoln Road and then the nearby boardwalk. Partner institutions whose art will be included in the tour include W South Beach Hotel, the Wolfsonian and Miami Beach Urban Studios.

Other cultural institutions, Ms. Shaw said, will be holding events such as film screenings and outdoor performances running from South to North Beach. City officials, she continued, are considering having an “art week trolley” that will link the activations together and make them more accessible.

The city has no set budget for Art Week, she said, but rather a budget for each individual activation.

Coinciding with Art Week will be a city-funded program that grants local artists and non-profit arts organizations space in empty storefronts in high-traffic areas such as Lincoln Road, Washington Avenue and 41st Street.

The program, Miami Today reported, matches artists with property owners who allow their space to be used at no cost for a 60- to 90-day period. The program’s $200,000 budget for expenses such as helping organizations with move-in, setup and insurance costs is being funded by the city.

One Response to Two weeks without Art Basel: what’s to replace it?