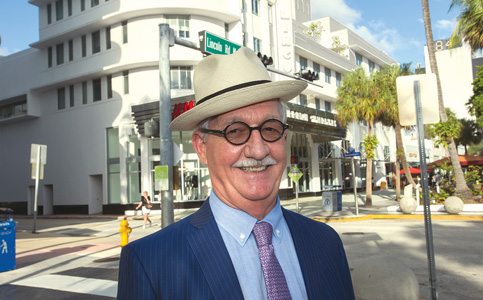 When Tim Schmand first visited Lincoln Road in Miami Beach in the 1980s, it was a far cry from the chic, artsy and bustling thoroughfare it is today. In fact, he said, it was largely abandoned.

That didn’t stop him from exploring, learning about its every nook and cranny and developing an affinity for its unique aspects, ingenious and idiosyncratic alike.

“It was just a magical space,” he said. “I’d spend all kinds of time there. I bought my current wife her first birthday gift on Lincoln Road. When we got married, it’s where we bought our wedding rings.”

Over time, along with other parts of South Beach, Lincoln Road bloomed and boomed, as did his career.

“Miami Beach is probably the finest urban beach in the United States, and that position for the beach is something that the BID and city want to explore,” he said. “We’re a great tourist destination, a great place to live. The weather’s great. The people are interesting, and Miami Beach’s cultural institutions are fighting way above their weight.”

When Covid-19 struck in March, a lot of that – including ambitious plans for growth and renovation along Lincoln Road – came to a halt.

But through several initiatives, from retail, restaurant and performing arts pop-ups to inventive exercise solutions, musicians on wheels and a forthcoming street play that incorporates vacant storefronts, Lincoln Road is on the comeback.

“Everything today is about the pandemic, but once we get on the other side of this, there’s going to be an economic boom because there’s so much pent-up desire,” he said. “And we have a long list of projects we’re working on to reactivate Lincoln Road in a way that again captures people’s imaginations.”