Advertisement
The Newspaper for the Future of Miami
Connect with us:
Front Page » Transportation » Big set-asides cut into Miami-Dade bus routes revamp 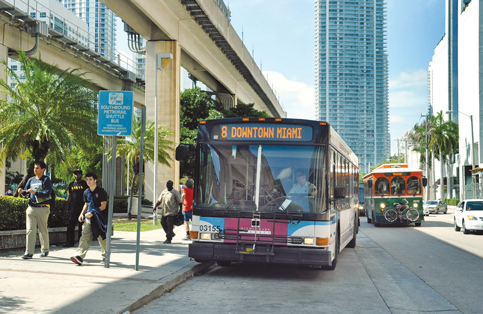 After more than two years of studies, workshops and outreach, Transit Alliance Miami’s plan to give Miami-Dade’s Metrobus route network its first comprehensive overhaul in 35 years is nearly done.

But despite past endorsements, some commissioners took shots at the group’s “Better Bus Network” last month, complaining it improved service in dense, affluent areas at the expense of poorer suburban regions with large minority populations.

Azhar Chougle, the nonprofit’s executive director, called the gripes myopic or nonsensical, arguing that much could have been resolved had an outgoing commissioner agreed to talk with the group.

The Better Bus Network, designed in response to 5,000-plus survey responses and thousands of interactions, prioritizes ridership over coverage by an 85% to 15% split.

Without adding cost, the new network would bring frequent service to 23% of all county residents, up from 10% now, adding 353,000 people.

Not all areas would benefit, Commissioner Dennis Moss said Oct. 22. In South Dade, he said, two changes – a short westward shift of Route 107 and an adjustment to the popular 35/35a route that at times would increase waits by 30 minutes – have some persons in mostly African American communities incensed.

Unless those changes went, he said, he would vote no.

Daniella Levine Cava, who also represents South Dade, said she shared those concerns. After consulting county attorneys, she suggested separating the routes from a coming package of route redesigns necessary to apply the plan’s changes.

Mr. Moss, who joins more than half the commission in leaving office this month, instead moved to remove them altogether.

“I don’t want this to go through as a recommendation and then the next group that’s in potentially says, ‘Well, hey, that was recommended,” he said. “I’m not OK with it. These disruptions are untenable.”

The commission then voted unanimously to remove both routes from future consideration.

A subsequent vote to support the plan and direct staff to “take all actions necessary” to apply its changes passed 10-1.

Barbara Jordan, the sole no vote, explained her reason: the plan has 22 fewer service miles than the existing one and would therefore cause longer waits, particularly for residents outside Miami and Miami Beach hotspots.

“Two buses on a 10-mile route is higher frequency than one bus on a 20-mile route,” he said. “Miles isn’t a way to measure anything but two points on a map.”

He said Mr. Moss’s opposition to the South Dade changes was inspired by his talks with a small, vocal contingent. Mr. Moss ignored Transit Alliance’s requests to meet.

The result may have lasting impacts. Carving 35/35a out of the plan, Mr. Chougle said, could keep county vehicles from returning to the route. The route is now operated by third-party vehicles Mr. Moss himself described as “subpar.”

“He worked against his own constituents in making those exclusions,” Mr. Chougle said. “But you can’t design the best network possible when the official in charge refuses to discuss any changes.”