Advertisement
The Newspaper for the Future of Miami
Connect with us:
Front Page » Top Stories » Super Bowl economic impact touches down at $571 million 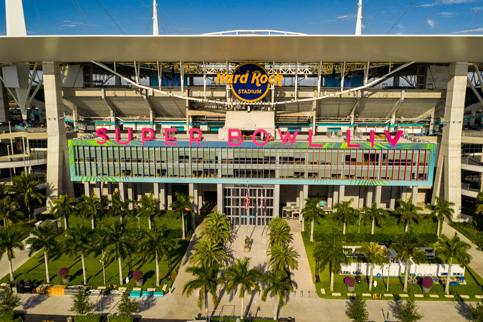 The Kansas City Chiefs may have walked out of Hard Rock Stadium with the Lombardi Trophy in February, but many Miami businesses won Super Bowl LIV – and two more big games are coming to town in January.

According to a report released by the Super Bowl Host Committee and reviewed by Miami Beach commissioners at a Finance and Economic Resiliency Committee meeting last week, the Super Bowl and surrounding events brought 4,597 full- and part-time jobs to South Florida and had a total economic impact of $571.9 million.

This number, the report illustrates, is a combination of “labor income, value-added GDP and output revenues.”
Visitor spending by spectators, media, teams and NFL staff made up $246 million of the total impact, while event hosting by the NFL and Miami Dolphins added $325.8 million.

Calculated total travel spending, the report said, was over $132 million. The economic impact on Miami Beach alone, Tourism and Culture Director Heather Shaw said at the meeting, was probably over $200 million. The average daily rate for hotels during Super Bowl Weekend, she said, was $938 – up from around $370 for the most expensive nights in 2019.

More than half of the nearly 5,000 jobs created, the report continued, were in the “Arts, Entertainment and Recreation” (1,255) or “Accommodation and Food Service” (1,182) industries.

“Super Bowl LIV,” the report said, “generated $34.1 million in state and local taxes and $50.4 million in federal taxes.”
According to a survey of over 1,000 attendees, it continued, the average spectator spent $1,781 per day, and the average member of the media spent $2,154. The priciest expense for both was lodging and accommodation, and the second most was non-Super Bowl entertainment, on which both groups spent around $500 each day. The average traveling party, survey showed, stayed in town for a little over three days.

While the Super Bowl brought a great deal of spending to South Florida, it was not free for taxpayers. According to a Miami Herald report from 2019, the price tag may be around $20 million including infrastructure, police and paramedic overtime and a partnership with the NFL to upgrade local youth sports facilities.

Improvements to Hard Rock stadium valued at about $579 million, an addendum to the Host Committee report said, took place between 2015 and 2019 and were not included in the main report. These improvements, it continued, probably played a major role in the selection of the site for the game and results of the development included “991 annual equivalent jobs and $155.5 million industry output.”

While the Miami New Times reported in 2016 that the renovation, which included an open-air canopy shielding spectators from the elements, was financed mostly by Dolphins owner Stephen Ross and the NFL, the county did commit to giving Mr. Ross up to $5 million a year to bring events such as the Super Bowl.

The capacity at Hard Rock on game day, the report said, was over 65,000. And while Miami might not see a crowd quite this big in one place anytime soon, the upcoming Orange Bowl and College Football National Championship will kick off in Miami later this season.

These events, said William D. Talbert III, president and CEO of the Greater Miami Convention & Visitors Bureau, are an opportunity to show the world that Miami-Dade is open for business.

This season’s Orange Bowl will be Jan. 2, he said, and the national championship will take place Jan. 11.