Advertisement
The Newspaper for the Future of Miami
Connect with us:
Front Page » Communities » Miami Beach’s Flamingo Park fastest to Slow Streets 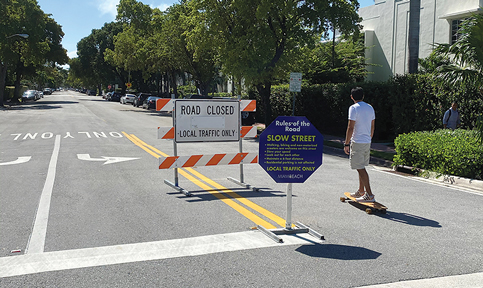 Flamingo Park has new “rules of the road” thanks to a pilot that will encourage pedestrian activity and slow driving in the area, and more county neighborhoods may soon follow suit.

The pilot, city Commissioner Mark Samuelian said, has been approved by the county and will run for 30 days before being evaluated. If feedback is positive, he continued, other neighborhoods and cities could pick up the initiative.

During the pandemic, Mr. Samuelian said, transportation needs evolved and many residents found themselves engaging in more outdoor activities such as running, cycling and walking. This program, he said, is an effort to meet this changing demand and foster outdoor activity in a safer space.

Essentially, he said, residential streets in this neighborhood are now targeted with signs at their entrance discouraging “through traffic,” mandating slow speeds and encouraging biking and walking. The aim, he said, is to get non-residents looking to cut through neighborhoods to get to a destination to avoid these streets.

Residential parking, a press advisory said, will not be affected.

Other cities including San Francisco and Oakland, CA, have already successfully implemented Slow Streets and established best practices that Miami Beach can follow, according to the city website.

“Our goal,” said Director of Transportation Jose Gonzalez, “is to encourage car-free transport in the Flamingo Park neighborhood.” While this area will be the first to try the program, he said, at least one other neighborhood has already expressed interest in Slow Streets.

City and county officials, Mr. Gonzalez said, will evaluated the pilot’s success based on multiple criteria. These factors include: facility use, including how many walkers and bikers use the streets, safety, an assessment of whether the program has indeed increased safety, and community satisfaction, including feedback from residents, neighborhood and local school associations.

Flamingo Park, Mr. Gonzalez said, is a good fit for the program because it has a school and park and is already very walkable.

The program, Mr. Samuelian said, is just one step in a larger plan to make Miami Beach more accessible for pedestrians and cyclists. Other initiatives, he said, include adding protected bike lanes on Washington Avenue and the ongoing effort to consider pedestrianizing Ocean Drive.

“My vision for Ocean Drive,” he said, “is one that puts people and pedestrians first. I view Slow Streets as another important step in this journey.”

Miami Today previously reported that while data suggest 62% of Ocean Drive users are pedestrians, only 42% of the road’s space is intended for pedestrians, according to Assistant Transportation Director Josiel Ferrer.

The possibility of converting Ocean Drive to an “Ocean Walk” is part of the city commission’s larger efforts to revamp the Beach’s Mixed Use Entertainment District. This effort, Mr. Ferrer said at a Sept. 17 meeting, would be consistent with the city’s 2016 Transportation Master Plan, which states that the priority for Washington Avenue should be transit, for Collins Avenue pedestrian/bicycle traffic and freight, and for Ocean Drive pedestrian traffic.