Advertisement
The Newspaper for the Future of Miami
Connect with us:
Front Page » Government » PortMiami dredging may rest on economic future of cruise lines

PortMiami dredging may rest on economic future of cruise lines 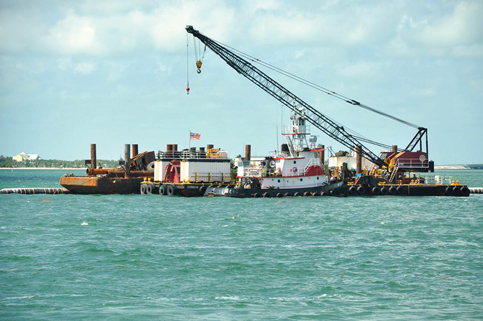 PortMiami continues to plan for more dredging, pandemic or not. As the coronavirus has plagued both Miami and the rest of the nation, there has been an increased focus on cruise ship travel and economic recovery.

Last year, Miami-Dade County commissioners authorized a three-year study. Now, after about a year and a half, US Army Corps of Engineers project manager Laura Reichold has an update on dredging work.

“There are two different types of dredging,” she said, “there’s federal dredging and operational maintenance. We’re looking at what’s happening in the next few years, and what we can do to maintain the harbor.”

The corps ran simulations using hydrodynamic models to determine whether widening the channels that vessels pass through would allow for faster shipping times, while keeping the ecosystem within the waters intact. That study considered the potential impacts dredging could have on the environment, wildlife, and life in the water.

In an effort to preserve the natural

resources, the Army Corps began by coor-dinating with wildlife agencies including the US Fish and Wildlife Service. Now however, that focus has shifted a bit to the future of commerce on the waters. “We’re evaluating the cruise ships from an economic standpoint, and the future of the cruise ship industry amid the pan-demic,” Ms. Reichold said. Environmentalists have been concerned for years about the damage dredging can do to environment, including to coral. Many were concerned about a deep dredging project several years ago that they said significantly affected the area around the port. To address those concerns, the crews overseeing the dredging process are now looking at the long-term effects of chan-nel widening. “When we look at deepening or widen-ing the harbor, [we use] a projection of over 50 years,” Ms. Reichold said. “While the results may not be instantaneous, I’d say those effects are being evaluated. Right now, we have no results to share.” But, she said, those results will come sooner than later. “The public can expect a draft to be released to the public come mid to late 2021,” she said. “I can tell you we don’t have the current pricing on the project ready at the moment.” While the widening of water channels con-tinues amid the pandemic, so does the need to maintain the natural resources underwater. Environmental groups in South Florida continue to meet periodically with Army Corps representatives to discuss the future of the PortMiami dredging project and to give insight on how to preserve the ecosystems in the water as well as keep wildlife safe. The US Centers for Disease Control and Prevention recently extended a ban on cruises from American ports that expires Oct. 31. That has eased some pressure to finish the study more quickly.