Advertisement
The Newspaper for the Future of Miami
Connect with us:
Front Page » Communities » New South Beach image and rules on drawing board

New South Beach image and rules on drawing board 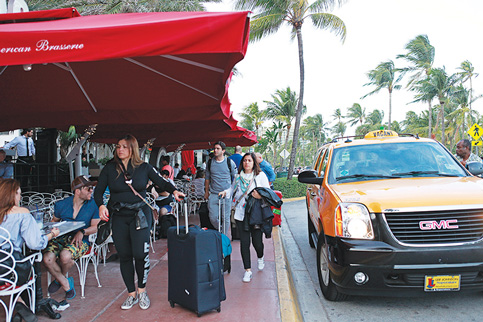 “Anything goes” might have once been a slogan for South Beach promoters, but Miami Beach commissioners agree that the area known as the Mixed Use Entertainment District needs a new image – and some ground rules.

Hawking, lewd behavior, “quality of life” related offenses, misuse of vehicles such as scooters and loud noise are some of the issues they referenced while acknowledging the desire for a change.

The city is exploring a rebranding of this area as the Art Deco Cultural District, and last month a commission and staff workshop explored ideas for activating and transforming the area, including encouraging economic expansion and revamping transportation.

Perhaps most controversially, commissioners are also considering zoning changes that could affect the area’s “party all night” reputation and prompt legal challenges.

Thomas Mooney, city planning director, presented multiple planning and zoning adjustments for discussion. While commissioners agreed that reimagining this area is a must, opinions diverged when it came to the best measures for mitigating the problem – as well as the source of the problem itself. Though proposed zoning changes target bars and clubs, some pointed out, these establishments have been closed for over six months and “problematic behavior” has continued.

According to Mr. Mooney, the proposed rules would roll back closing time for bars and clubs from 5 a.m. to midnight, with establishments looking to stay open later being required to meet certain guidelines, including gaining approval from an alcohol control board that the city manager would form. Future standalone bars, he said, would also be prohibited, and use of rooftops would be allowed by restaurant owners.

Commissioner Ricky Arriola noted that bars and clubs might not be the only problem and suggested that rather than discourage these establishments entirely, the city could work to attract investment from high-end clubs and bars.

“I don’t want us to get so focused on these establishments as the main driver of bad behavior,” he said. “Over the past six months they’ve been closed and we’ve still seen bad behavior.”

“Miami Beach isn’t cool anymore,” Mr. Arriola continued. “The best bars and clubs aren’t opening here.” Instead, he said, South Beach is getting “the worst.” Investment in bringing in higher-end establishments, he said, could be the way out.

Multiple commissioners including Michael Gongora expressed concern over an alcohol control board granting privileges. In other cities, Mr. Gongora said, such committees have been fraught with politics, fraud and payouts. Additionally, he said, such a board should not be selected by the city manager, who is not elected by residents. Finally, he added, a vote to roll back closing time from 5 a.m. to 2 a.m. was held a few years, and residents voted no.

Mr. Gongora also noted that, despite the area’s inherent issues, there are many “good operators” on the strip.

Mayor Dan Gelber said that while the district is certainly home to some great operators, it isn’t easy to just “flush out the bad ones.”

“I’ve heard ‘let’s get the bad operators’ since I became mayor,” he said. The proposed rules, he continued, present an opportunity for South Beach to rid itself of bad operators and build itself back up.

“My approach isn’t to say ‘We’re shutting down at midnight,” he said, “it’s to say ‘everyone starts at midnight.’” Businesses that play by the rules, he said, would earn more privileges.

Mr. Meiner pointed to Times Square in New York City as an example of a tourist hub that once had high crime rates and was turned into a pedestrianized, highly activated area.

Commissioner Mark Samuelian echoed Mr. Meiner’s comments about control, and noted that while an alcohol control board or midnight curfew might not be the right solution, some solution is needed, and that might include rolling back drinking hours.

Commissioner David Richardson doubled down on the suggestion that alcohol establishments are not the only problem and asked not to lose sight of the possibility that, with the right rules and safety measures, the district could be home to both nightlife establishments and family-friendly activities.

“What I don’t want to get lost,” he said, “is that everybody is welcome in Miami Beach.”

City Attorney Raul Aguila told commissioners that an attorney for multiple South Beach operators including the Clevelander, The Palace, Mango’s and Ocean’s Ten had advised him that these operators believe they have a vested right to operate within the restraints set out by their land use orders and permits. If a rollback were to be applied, Mr. Aguila said, it would likely face a legal challenge.

Mr. Gelber said that, if done right, the revamping would be positive for residents, tourists and “good operator” establishments, as new rules would “raise the floor” when it comes to the quality of operators.

“For those of you who are worried that the younger version of yourself won’t have a place to go,” he said, addressing reminiscent comments from some commissioners, “they will. They’ll just have a place that’s operating a little better.”

While many members of the public tuned in to the meeting, no public comment was offered. All issues and proposals, Mr. Gelber said, would go before many committees as well as the city commission, where residents and stakeholders would get a chance to speak.