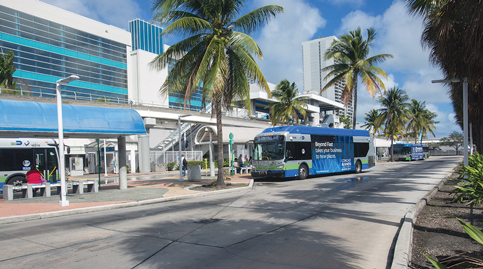 Plans for a temporary bus terminal that would unlock a 3½-year-old joint development project are still on hold – and could possibly be canceled – as Miami-Dade considers a massive transit offering from Malaysian casino giant Genting and partners.

Miami-Dade commissioners approved the project April 2017. Genting, which owns the former Omni mall across the street, has sought to build a vast gambling resort on the old Miami Herald site it also owns.

Construction of the temporary station was to have begun in December 2018 and was estimated to take about six months. Shovels never hit the ground, nor did they on subsequently set start dates.

The most recent reason for the project being put on hold, Miami-Dade Transportation and Public Works Director Alice Bravo said, is the county’s consideration of a bid from Genting and partners for a monorail connecting Miami and Miami Beach.

In 2019, Genting and Chinese company BYD submitted to Miami-Dade a monorail proposal for what is known as the Beach Corridor in the county Smart Plan, a 2016 initiative to bring rapid transit upgrades to six key commuting corridors.

A heavily redacted draft of the proposal included a pitch to swap the Genting-owned One Herald Plaza, currently occupied by Art Miami, for another waterfront parcel nearby, the Miami Herald reported in December.

The unsolicited proposal prompted Miami-Dade’s bid request process. Miami Beach Monorail Consortium, a group to which Genting is a partner, was the only proposer. Meridiam, which developed the PortMiami tunnel, is the consortium’s majority partner. A county prohibition on Chinese companies participating in the bid request process barred BYD’s involvement.

The county has already gone through a “lengthy planning process,” Ms. Bravo said, that included multiple studies of the corridor dating back to a 1988 examination of the feasibility of light rail.

Other modes considered for the “Baylink” project included Metrorail and Metromover extensions and streetcar, the 2006 study for which marked the beginning of a nine-year gap until another study was delivered.

A 2018 study by county consultant Parsons said building a monorail link on the causeway, which comprises five of the corridor’s eight total miles, could cost up to $1.1 billion. Yearly operations were projected to cost about $18 million.

A Metromover extension would cost about the same and provide riders with a one-seat trip between the cities, the study said, but it would only be able to carry about a third the number of passengers hourly.

While Miami-Dade contemplates the consortium’s proposal, a process that is now under the county’s “cone of silence” hush ordinance, construction of the temporary bus station is paused, Ms. Bravo said.

And it could no longer be necessary. If the county agrees to swap lands with Genting, she said, One Herald Plaza would be the location for an even more elaborate multimodal hub than what Genting originally planned to build on Northeast 14th Terrace.

“If you did that, you wouldn’t need a temporary bus terminal, so it’s actually a benefit to the public,” she said. “Independent of the unsolicited proposal and that procurement, this may be what makes sense for us anyway, given what we recommended for the Beach Corridor.”

What that would mean for Genting’s other development plans is uncertain.

The company has a 90-year lease with Miami-Dade at the Northeast 14th Terrace site. Under its contract terms, Genting is to pay the county’s transportation and public works department at least $100,000 a year rent during construction of the hotel project, which former Deputy Mayor Alina Hudak estimated would create nearly 1,900 jobs, with 171 direct and 100 indirect permanent jobs after the project’s completion.

Including a $10 million one-time payment, the company was to pay Miami-Dade the greater of either 50% of gross revenues generated from the development’s retail portion or $300,000 per year. Ms. Hudak estimated the project – fully funded by Genting – would generate almost $55 million for the county over its lease term.

But it’s still too early to say what will happen, Ms. Bravo said.

“Right now, it’s all being contemplated,” she said. “Nothing’s definitive. Nothing’s been decided yet. It makes sense to figure this out.”