Advertisement
The Newspaper for the Future of Miami
Connect with us:
Front Page » Opinion » By creating local areas bosses, Miami slides backward

Miami took a long step backward into the era of municipal bossism in its budget that took effect two weeks ago. Instead of having a professional manager in charge, three-fifths of the city’s area now falls under political mini-bosses.

The step toward a long-gone dark era in big-city government came late in a budget meeting, when commissioners put most of Miami’s mini city halls under the sole control of the local area commissioner. Those commissioners will now hire their own staffs and run their own shows, independent of the manager, the mayor or other commissioners.

The mini city halls – the headquarters of city Neighborhood Enhancement Teams – deal with area matters, ranging from municipal complaints to ties with the city’s other departments. They are the most direct link to city services.

Two commissioners – Ken Russell and Keon Hardemon – correctly chose to leave the enhancement teams in their districts where they’ve always been: under control of the professional city manager who runs city staff under direction from the full commission and the mayor.

That professionalism is vital in a major city. It isolates city employees from pressure by either powerful companies or an individual commissioner whose aims might not align with citywide needs. Commissioners deal with the manager but outside of their own office staffs cannot direct individual employees – or, at least, could not until this month.

Suddenly, however, three commissioners – Alex Diaz de la Portilla, who dreamed up the idea, Joe Carollo and Manolo Reyes  – have successfully voted to make themselves mini-mayors of their own districts, with a budget to hire and fire their own people in the neighborhood offices. 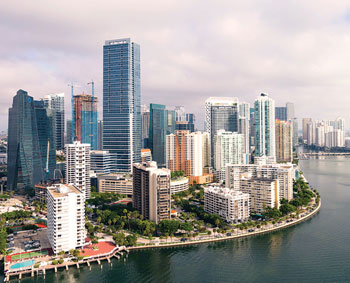 Downtown’s neighborhood services will remain under the city manager’s control.

Miami is in the process of luring businesses from high-tax states. Miami’s Downtown Development Authority has been particularly adept at that. But how do you explain to a company from Los Angeles or New York that different commission districts may set up their own rules for helping to provide local services, and that a new business will have to deal with the local boss – the district commissioner – to get things done?

Equally important, how well will Art Noriega, the professional city manager, function when three-fifths of the city is in three independent fiefdoms?

“You’ll figure it out,” the Miami Herald quoted Mr. Diaz de la Portilla as telling Mr. Noriega. “That’s why you get paid the big bucks.”

But Mr. Noriega shouldn’t have to figure it out. It’s clear as daylight that the system of having an apolitical manager control city staff and carry out professionally the policy that a commission and mayor create was born precisely because of the bossism created by direct political control over city employees and municipal favors.

It’s no accident that the city manager system grew just after pioneering journalist Lincoln Steffens unveiled municipal corruption in the nation’s large cities. The book that published his articles in 1904, appropriately named “The Shame of the Cities,” became a casebook for practical political reform.

What Steffens detailed was out-and-out graft and corruption, which nobody is alleging in Miami. But tools used in corrupt cities included the favoritism in jobs and services that a single elected official could control, misusing municipal resources and funds as a result.

Steffens’ reports led to professional civil service under a city manager, a system that can serve well – and without disruption – no matter who is elected, carrying out the policy of elected officials without municipal waste, inefficiency, corruption or the distribution of money and power directly to those who are elected. That is the professional system that Miami has operated under.

Granted, systems depend on those involved. Miami has had excellent city managers, good managers, and a few poor managers. But until now it has never consciously reverted to a spoils system where elected officials directly control jobs and favors.

Our concern is not that the three commissioners who newly control jobs and services in their districts would necessarily misuse their offices. Our worry is that they have created a structure in which that could be done at any time by whoever holds those three commission seats. No commissioner holds office forever, and who comes along next is being handed powerful but improper tools.

Moreover, the job of a city manager is to a large extent technical. The manager has to make sure that processes, services and employees interrelate across the city. The manager sets operating priorities. But how can the manager do that well with three mini-managers in three mini city halls hiring their own teams and issuing their own priority orders? The question Mr. Noriega raised was no trifling concern.

Municipal managers are meant to be professional administrators. They differ from elected commissioners, whose skill is politics and policy.

So, how will three mini-managers suddenly manage professionally, interrelating with Mr. Noriega and each other? Will there be, for example, four differing local policing policies in Miami?

Usually, professional municipal administration is a foreign role for politicians. Mr. Carollo is a rare exception, because he was a city manager in Doral. But we cannot expect whoever is the next commissioner in his district to have those skills. We should never structure governments based on who the current officeholder is but on how the system can best work whoever is elected next.

Also, the city should not be structured so that some areas use one set of operational rules and other areas play by another. If Mr. Carollo, Mr. Reyes and Mr. Diaz de la Portilla all operate their fiefdoms in one way and the manager operates in another, Miami will use two sets of rules. And if those three commissioners differ among themselves, Miamians could have up to four rulebooks, depending on the neighborhoods in which they live, work or own property.

It’s questionable that, if challenged in court, this hybrid system could stand even if it could function well.

Besides, how well would a city work if one commissioner operated his fiefdom locally in direct contradiction to the policy of the city commission as a whole?

Frankly, this hybrid city structure is a recipe for future disaster. That endangers the 4,000-person workforce, the residents, the taxpayers, and democracy as a whole. The principal that city employees should not be serving the public based on the orders of a single elected official is a basis of good government.

Commissioners should have the wisdom to reverse their deviation to this potentially destructive path before someone aggrieved by one neighborhood office mounts a successful legal challenge.