Advertisement
The Newspaper for the Future of Miami
Connect with us:
Front Page » Profile » Lester Sola: Pilots county’s airports toward $5 billion capital investment 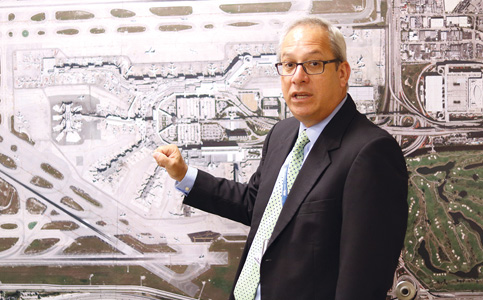 When Lester Sola began working for Miami-Dade 28 years ago, his first post was in the county Aviation Department.

Twenty-eight years and a variety of other county jobs later, he leads the department, overseeing the operations and growth of four general aviation airports and Miami International Airport (MIA), the county’s top economic engine, which together generate $31.9 billion yearly and support more than 275,000 jobs

He’d worked briefly in banking and finance before joining the county, but his collegiate focus on public administration indicates an early and earnest interest in government work. And the goal, he said, was always Miami-Dade.

“I had an opportunity to do a management training program in Broward, but I wanted to work and serve in the community I had grown up in and live in,” he said. “For me, a guiding principle has always been to serve and help what you call home.”

“I’ve always been sent – and happy – to fix issues in departments, but the one place I always wanted to come back to as director was this airport,” he said. “The amount of responsibility not just in our county but to the hundreds of thousands of jobs associated with this airport and the important role it plays in this community – it’s a challenge, but it also provides a significant amount of motivation to deliver and continue to grow it.”