Advertisement
The Newspaper for the Future of Miami
Connect with us:
Front Page » Business & Finance » Commercial fishermen sinking as yields fall without China’s buyers 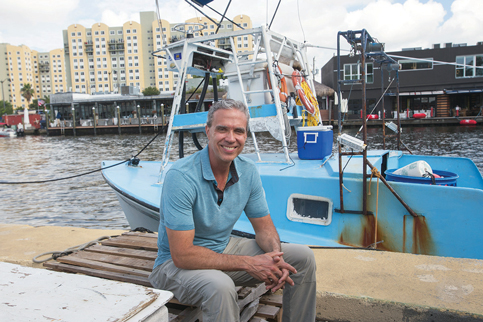 Offshore fishermen work in a predominantly healthy environment, so Covid-19 hasn’t been debilitating for the workforce, said Luis Garcia of Garcia’s Seafood, a commercial lobster and stone crab business, “but it’s a pandemic in the sense that it has trickled down economically. The price of our product is plummeting because restaurants and bars that buy our product were not in business and we were sitting on the product.

“In the past several years we’ve had another revenue stream selling overseas – lobster to China, for example – but that market also shut down.”

As a result, he said, the wholesale price for lobster dropped to $4 a pound, down from an average $10-$14 last year. Meanwhile, “lobstermen have to pay the same amount as always for materials to build traps and buy necessary equipment. So it was crippling at first.”

The full economic impact was a bit delayed, said Manny Prieguez of Miami River Lobster and Stone Crab, because when the pandemic arrived at the end of March the lobster season was already ending.

But when the season started up again at the beginning of August, he said, “it had a strong negative impact. Most was going to China as live lobster, and there are few if any direct flights from Miami to China. There is very little demand for processed lobster.”

“Now that the economy is opening up we are seeing a little uptick in the price of lobster,” Mr. Garcia said. “But to get Grade A prices the product must be fresh from the ocean. If you must freeze it you have to take a lower price. This is something we are fighting through right now.”

Casablanca Seafood’s Jorge Sanchez described the lobster market as “a really big roller-coaster. It’s up and down, and you can’t control it. Right now prices are going a little higher because there’s not a lot of lobster around this year, but it’s hit or miss.”

He estimated that at least 35% of commercial fisheries have gone under, and many others won’t make enough to survive into next year. Adding to the industry’s woes is a shortage of employees as fisherman turn to more reliable work in construction.

“If you get a second job,” Mr. Sanchez said, “you lose your commercial license. If you don’t do your paperwork you will lose your license.

“I get emails three or four times a week with new regulations. Most of these guys don’t have computers. If you don’t have a computer you can’t keep up with regulations – and you could lose your license for selling something that just became illegal a few days ago.”

Wholesale lobster prices are improving slowly but surely, and are now in the neighborhood of $6.50 a pound, Mr. Prieguez said. He expects exports will pick up right before Christmas, historically a very important time for sales.

“Another interesting phenomenon,” Mr. Prieguez said, “is that with prices so low a lot of local restaurants have put it back on the menu. But it’s hard to say whether that will continue.”

Mr. Sanchez said recently some crews have taken to peddling their catch in the street.