Advertisement
The Newspaper for the Future of Miami
Connect with us:
Front Page » Business & Finance » Perry Ellis targets new trends in sales abroad and loungewear 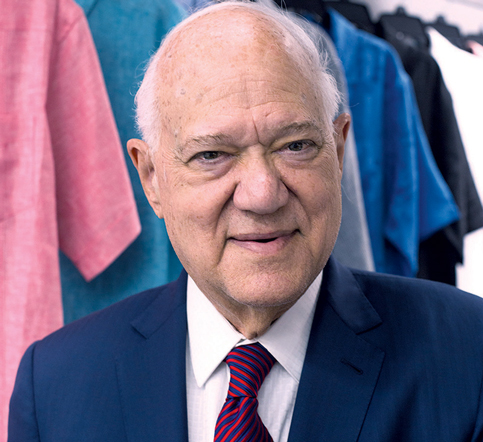 Roughly three years after buying back control of Perry Ellis International and taking the company private, founder George Feldenkreis is focused on new trends, recovering from the pandemic and international expansion.

After Mr. Feldenkreis was ousted by board members of publically-traded Perry Ellis International in 2017 despite the company having a positive financial year, Miami Today previously reported, an entity he controlled succeeded in acquiring all shares of the company.

Despite the downturn caused by Covid-19, Mr. Feldenkreis said, taking back the company provided Perry Ellis International with greater flexibility to make decisions for the future without being unduly influenced by stock market volatility. Though the decision has meant less financial freedom in the form of extra funding, he continued, the added agility and ability to make decisions without appealing to a stock market that changes with the daily news is worth it.

Perry Ellis International, he said, has seen digital sales growth of 80% to 110% on its websites for various brands. Still, Mr. Feldenkreis said, the pandemic forced him to let go of many workers, who he said he hopes to hire back as soon as possible.

According to Mr. Feldenkreis, the pandemic took the hardest hit on unprepared retailers who had already been struggling, though some such as Macy’s, where his brands are sold, survived due to their strong credit and online presence.

In addition to injuring brick-and-mortar clothing sellers, Mr. Feldenkreis said, the pandemic has fundamentally changed how people will dress – and Perry Ellis will need to adapt. The past six to eight months of quarantine and working from home, he said, may have a permanent influence on fashion as more customers scoop up loungewear and golf apparel while suit and dress sales decline.

To meet the increasing demand for different types of clothes, Mr. Feldenkreis said, his team is experimenting with fabric and product innovation.

International expansion, he said, is also on the horizon. There are simply too many stores in the US so there is no demand to build more, Mr. Feldenkreis said, while other countries are still adding stores and seeing a growth in average income.

“There’s more opportunities overseas than in the US,” he said. One that will come to fruition soon will be an agreement for the right to sell Nike swimwear products worldwide.

Perry Ellis already has an operation in London that overseas European marketing, Mr. Feldenkreis said, and he sees this continent, as well as North American neighbors Mexico and Canada, as an “area of major interest.”

But with international growth, he noted, comes competition from digital retailers such as Amazon and China’s similar company Alibaba. The same countries that are growing in stores and income, he said, are often the ones that allow digital retailers to grow rapidly, at times filling a hole when there are not enough traditional retailers to meet demand.

Beyond international expansion, Mr. Feldenkreis said, one priority for the company is obtaining new licensing agreements to sell more brands and products, as well as focusing on the success of Perry Ellis International’s golf offerings.

“Golf has been a big winner this year,” he said, “because people who couldn’t play other sports devoted the time to learn how to play golf.”

Another current initiative, he continued, is an effort to consolidate much of the company’s warehousing space into one campus in Dublin, GA. While the company boasts multiple industrial sites in the US, including some that are rentals, Mr. Feldenkreis said most of these would be consolidated into the facility in Georgia.