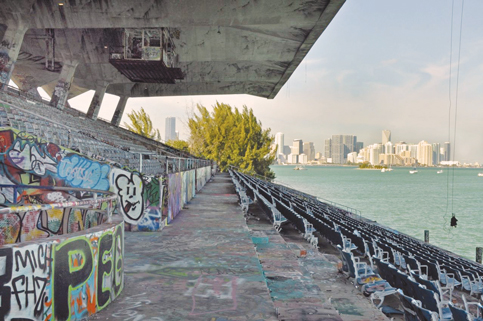 The long-awaited restoration of Miami Marine Stadium on Virginia Key is one major step closer to reality, according to the city’s Office of Capital Improvements.

City staff delivered a status report on the multi-million-dollar project at a virtual meeting of the Virginia Key Advisory Board on Sept. 22.

The project is near completion of the permitting process, and city officials believe the project will be ready to procure a general contractor this fall. Construction would follow.

This news was reported by Hector L. Badia and Jocelyn Nguema, with the Office of Capital Improvements.

“We’re excited to announce that right now we’re closing out the permitting phase. We expect that phase to be completed by the end of this month, September,” said Ms. Nguema.

“And what that’s going to do is allow us to move into the next phase of the project, which is the procurement process for the general contractor, as well as then move into construction,” she said.

Much of the barrier island is owned by the City of Miami, including the historic waterfront stadium and basin.

The city closed the stadium in 1992 in the wake of Hurricane Andrew. Talk of restoring it was just that for years, until November 2016, when the city commission approved $45 million in bonding to borrow money to fund stadium renovation and other improvements.

The restoration became real in January 2017 when the commission hired R.J. Heisenbottle Architects for architectural and engineering services related to the stadium.

The property surrounding the concrete stadium is being developed as a flex park in a separate project.

Ms. Nguema said the Office of Capital Improvements is constantly reviewing the scope of the stadium restoration and projected costs.

Board member Peter Ehrlich questioned the estimate, believing earlier estimates were lower. He said, “I thought the cost for restoration was $40 million to $41 million and I’m seeing on my sheet $48 million … how did the number go to $48 million?”

Mr. Badia said, “That’s the current cost estimate from the architect … We’ve been through a number of sessions with the architect trying to reduce the cost, and we’ve come up with some bid alternates to be able to take this to procurement, and those alternates can be considered at that time. We really don’t know what the cost is until we get the bid in.”

Mr. Ehrlich responded, “If you don’t know what the cost is, why is he giving you this $48 million figure?”

Mr. Badia said, “At this time, if we wanted to reduce the cost estimate we’d be reducing the scope of the project.”

While the report noted progress, it also said: “Seeking solutions to zoning conflicts that could result in construction schedule delays if not resolved by the completion of the general contractor procurement process.”

A board member asked for clarification, wondering if the property would be rezoned.

David Snow, with the city’s Planning Department, said: “I think it’s important to understand that it’s not so much about a zoning change but as a use allowance. And right now, place of assembly, which is a defined use in Miami 21, is not a permitted use in the park category in Miami 21 which is CS (Civic Space Zones).”

He added, “It’s something we are working on; the planning director and the zoning administrator are working together on it, and we hope to have it quickly resolved through the process of a text amendment for Miami 21.”

Ms. Nguema had said issues need to be resolved because of decades of non-use of the stadium.

Board member Lynn Lewis asked, “What matters need to ironed out relative to the decades of non-use?”

Carlos Lozano, also with the Office of Capital Improvements, said, “Basically, the certificate of use for the stadium expired in 1992.”

Mr. Snow said a place of assembly is not allowed in the current zoning rules governing properties zoned CS.

Along with the planned flex park improvements and additions, the city is considering building a maritime center next to the stadium.