Advertisement
The Newspaper for the Future of Miami
Connect with us:
Front Page » Transportation » 50% of Miami International Airport passengers likely to return in 2020

50% of Miami International Airport passengers likely to return in 2020 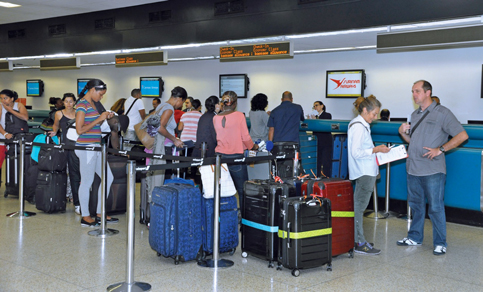 “By the time the year is over, we’ll probably have it 50% of the volume we had last year as far as passenger,” he told Miami Today. “Cargo will be higher than what we had last year. There’s still a demand for products. Products have to move.”

And once a vaccine for the virus is announced, he said, the airport will be a major player in its distribution.

During normal times, MIA on average sees 105,000 to 115,000 domestic and international passengers move through its terminals daily. At its lowest point in mid-March, the number had sunk to 3,500 per day.

As airlines enacted a variety of safety protocols to match those MIA staff employed, passenger confidence has risen.

In August, the most recent month for which complete numbers are available, international movements at the hub fell roughly 90% lower than for the same month the year prior – 198,418 enplaned and deplaned passengers compared to more than 1.9 million in August 2019.

Domestic traffic has fared significantly better. In August 2019, nearly 1.9 million stateside passengers flew into and out of MIA. This August, 669,803 did – about a 65% differential.

While mail cargo remained lower than before – about 78% and 17% below August 2019 levels internationally and domestically, respectively – freight cargo exceeded last year’s figures for the month.

That’s just the beginning of what is likely to be an explosion in cargo traffic at MIA, Mr. Sola said.

MIA already handles more than 2 million tons of cargo yearly. But as one of the only pharma-certified airports in the entire US and a gateway airport to Latin America and the Caribbean, the hub is uniquely positioned to be pivotal in distributing a Covid-19 vaccine to the region.

“We have so many cargo operators working out of this airport, and there’s no doubt we’ll be a hub for that vaccine into South America, the Caribbean and Central America,” he said. “We are making preparations now, taking steps with our cargo operators, with how the additional cargo volumes and movements will take place.”